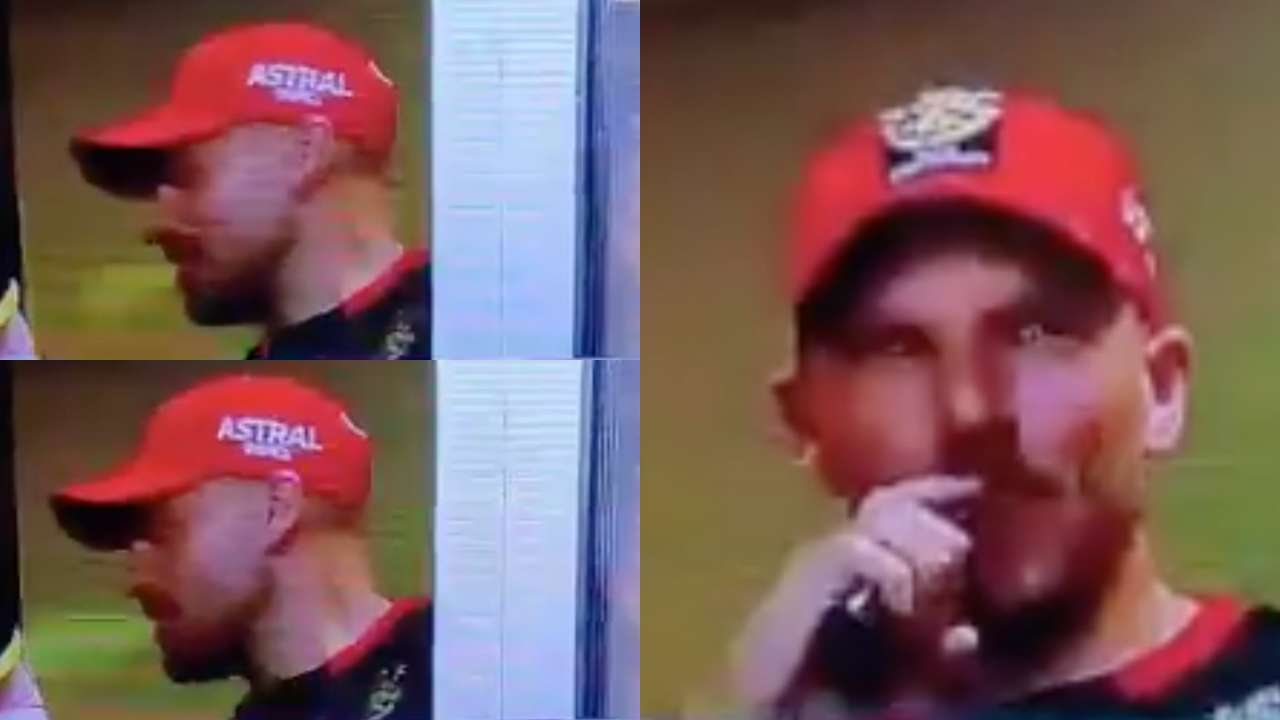 Saturday’s ‘Royal’ IPL group stage match between Bangalore and Rajasthan at the Dubai International Stadium ended in a rather nail-biting fashion. AB de Villiers, RCB’s star overseas import, starred with yet another game-changing knock, scoring a 22-ball 55 this time; as Bangalore clinched the final-over thriller by 7-wickets to register their sixth win of the season.

De Villiers’ sensational match-winning pyrotechnics sure grabbed a lot of eyeballs on social media. But it seems his Australian teammate, Aaron Finch, has also caused quite a stir on social platforms. Towards the closing of the match, several cameras spotted the Australian LOI skipper ‘vaping’ in the RCB dressing room.

Was Aaron Finch Smoking in the RCB camp? Is it allowed?

Aaron Finch was vaping. So what is vaping? An electronic cigarette is used for vaping. An electronic device that simulates tobacco smoking. It consists of an atomizer, a power source such as a battery, and a container such as a cartridge or tank. Instead of smoke, the user inhales vapor. Vaping is less harmful than smoking a cigarette as it is tobacco less. However, there are many health concerns of vaping as it produce a number of dangerous chemicals.

It all came to the fore during the last over of Bangalore’s innings. Needing 8-runs to win off 5-balls, all eyes were on Mr. 360 and Gurkeerat Singh Mann to see if they could see off the 178 run-chase successfully. In a likely attempt to ease some of the nerves, the broadcasters changed their camera angles to cover the players’ and staffers’ reactions from either team’s dressing rooms. At one point, the camera focussed on Finch standing alongside Shahbaz Ahmed in the RCB camp. Fans recorded a clip that showed the RCB opener blowing vapours from his mouth before covering it with his fingers.

The footage left a lot of people in splits over Finch’s reaction to the tense match situation. Some of them, however, raised questions over his actions and their legality. As of yet, the IPL Governing Council (GC) hasn’t made its stance public on players smoking substance during a live match.

Did I just see Finch having Vape in the dressing room? #IPL2020

@IPL is it legal to #vape inside the dressing rooms ?
What say @AaronFinch5 ?@RCBTweets , do you have anything to say ? @imVkohli was just standing ahead of Finch , I am sure he can vouch for what I saw !

As far as the match is concerned, earlier in the day, Rajasthan posted a solid 177 onboard courtesy of contributions from Robbie Uthappa (41 off 22) and captain Steve Smith (57 off 36). Chris Morris was RCB’s pick of the bowlers with figures of 4-0-26-4. For RCB, captain Virat Kohli scored the highest after de Villiers with a 32-ball 43.

The outcomes of Saturday’s two matches have placed RCB at a convenient 3rd spot on the points table with 12 points. RR, meanwhile, continues to languish at the 7th spot with just 6 points from 9 games.