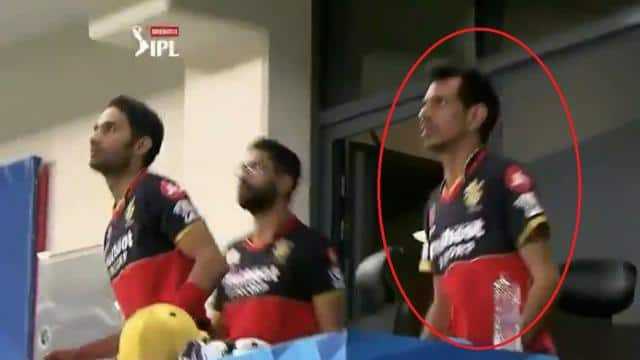 Towering sixes that land in the stands. It’s often fans who are seen running for cover in a cricket match when batsmen are smashing the ball into the stands. However, in the Indian Premier League (IPL) game between the Royal Challengers Bangalore and Chennai Super Kings, it was the players. A huge six from allrounder Washington Sundar, headed towards the dressing room saw his teammate Yuzvendra Chahal running for cover.

Washington Sundar’s Massive Hit
Washington Sundar came in to bat when the Royal Challengers Bangalore were looking to up the run rate. Of the bowling of Karn Sharma, Sundar got to the pitch of a length delivery, perfectly timed it and hoisted it straight into the stands towards the dressing room.

Chahal Runs For Cover
Seeing Sundar’s well-timed hit heading towards the dressing room, Yuzvendra Chahal decided to take evasive action and ran for cover. In a video posted on social media, Chahal can be seen running away from the seating area into the back room.

Washington Sundar’s shot took flight across the longest part of the ground as it sailed towards the dressing room.

Kohli Stars in RCB’s Win
Royal Challengers Bangalore registered their biggest defeat over the Chennai Super Kings when they ran away with a 37-run win. Captain Virat Kohli led from the front with the bat, contributing a match-winning 52 ball 90. Kohli’s onslaught towards the end of the inning, in the company of Shivam Dube (22 off 14) saw RCB reach a fighting 169/4; which was not in sight midway through their inning. The Super Kings run chase was once again derailed as they lost wickets at regular intervals. With the required rate mounting and their batsmen failing to stitch together a significant partnership, they ended up 37 runs short of the target. Ambati Rayudu the only valued contributor with 42.

The Royal Challengers are back to winning ways and would want to carry the momentum into the second half of the tournament.