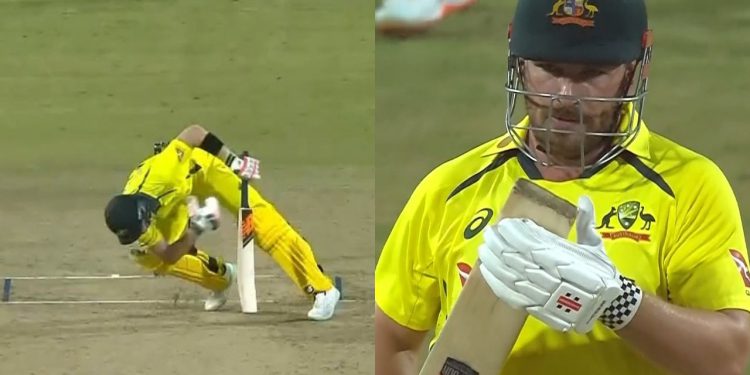 The Kangaroos were invited to bat 1st in the rain-curtailed 2nd T20 international game against India. The first 4 overs of the eight over game were dominated by the visitors as an Aaron Finch onslaught left Rohit an co. without an answer; until Jasprit Bumrah came in.

Bowling the fifth over of the game, Bumrah dismissed a dangerous looking Aaron Finch off the last ball of his over.

Finch, batting at 31 off 14 at that  time, was standing with an open-chested stance, perhaps looking to unleash a big swing on good length delivery thay may have been coming.

However, Jasprit Bumrah- being the undisputed yorker-king that he is slipped in an unplayable yorker that skipper Aaron Finch couldn’t lay a bat on.

The delivery landed on the bottom of the leg-stump, uprooting the stick from the surface that held it firm.

Interestingly, the aussie skipper was impressed by the brilliant execution and clapped to appreciate Bumrah before walking off the field.

In his second over, Bumrah bowled another pin-point yorker that resulted in Steve Smith tripping over.

The dismissal of Aaron Finch off an inspired piece of bowling from Jasprit Bumrah meant that the Men in Yellow had to take their foot off the accelerator for the time being.

However, a breathtaking cameo from Matthew Wade (43* off 20) eventually helped Australia accumulate 90 runs off their 8 overs.

In reply, Team India never looked in trouble as Rohit Sharma smoked 46* off 20 balls to take them past the finishing line with four balls to spare.

On a night where all the other bowlers were taken to the cleaners, Zampa and Axar had successful outings, taking 3 and 2 wickets respectively.