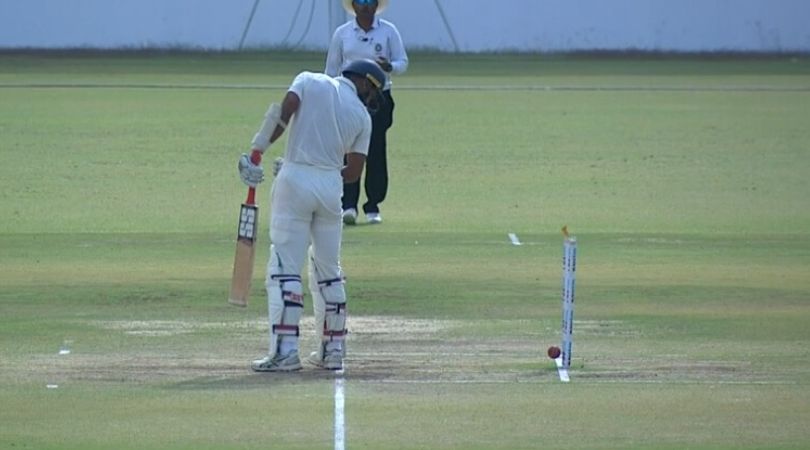 Akash Deep Involves In Bizarre Dismissal In Ranji Trophy Final: On  Friday, in the final match of the 86th season of Ranji Trophy, Saurashtra lifted the trophy for the first time in the history of the tournament after defeating Bengal at Saurashtra Cricket Association Stadium in Rajkot. Meanwhile, during the final day of the match, Bengal batsman Akash Deep was involved in a bizarre dismissal.

It all happened in the sixth over of the fifth day when Saurashtra captain Jaydev Unadkat’s presence of mind dismissed the Bengal’s batsman Akash Deep. Actually, the batsman was unaware that he is standing outside the crease and he was not at all thinking that the bowler will throw the ball into the stumps.

BCCI has shared the video of the incident on their official website. It is looking one of the most Bizarre dismissals in the history of the cricket. BCCI has uploaded the video with the title, “Unadkat’s presence of mind to run out Akash Deep.” Here we are also attaching the video of the same at the below of this article.

Earlier in the match, after winning the toss Saurashtra opted to bat first at Saurashtra Cricket Association Stadium in Rajkot. Meanwhile, in the first innings, they set a good total of 425 on the board before getting all out. From Saurashtra, Arpit Vasavada played a centurion knock of 106 off 287 balls. In the reply, Bengal managed to score 381 before getting out and hence trailed by 44 runs in the first innings of the match. At the end of the fifth day of the final match, only 34 overs could be bowled off the Saurashtra’s second innings. And hence in the end match result was came in a draw. But on the basis of first-innings lead Saurashtra won the match.