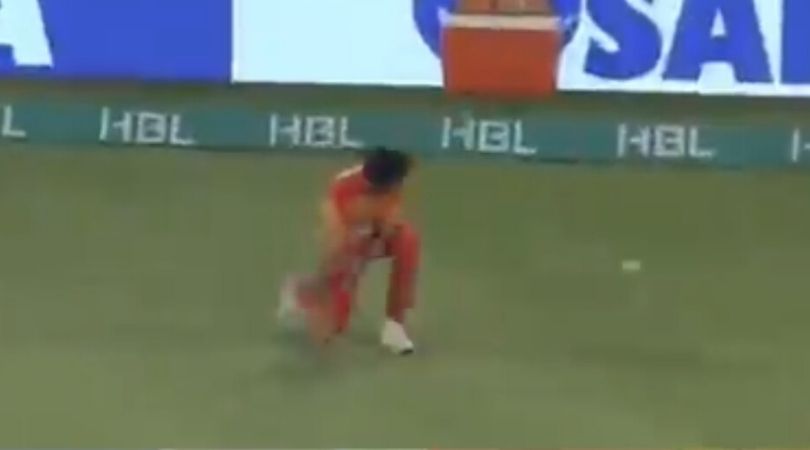 Owing to a pandemic coronavirus outbreak, the cricket action that fans are getting to savor is few and far between. Amidst this limited content-streaming, Pakistan’s Akif Javed unwillingly attempted to improve the forlorn mood, courtesy some sloppy fielding.

Akif’s team, Islamabad United were locking horns against the Karachi Kings, at the latter’s home-ground, the National Stadium. Being able to score only 136-runs with the bat;United’s bowling-attack had a daunting task ahead of them, defending a score such substantially below-par. The boredom of playing at a stadium devoid of any spectator seemed to have made its impact on the players and their performances. Case in point being, 19-year old fast-bowler Akif Javed’s shoddy fielding effort.

The final-ball of the seventh-over; Rumaan Raees lobbed a short-pitched delivery at the on-strike batsman, Imad Wasim. The Karachi-captain played a simple uppercut, sending the ball tumbling towards the third-man region. Javed, stationed over there, had a solitary job of collecting the ball and jabbing it back at the bowler. Instead, a delayed and misjudged reaction caused the ball to roll right between his legs and reach the boundary ropes. On-air commentator Alan Wilkins made up for the absence of the on-field spectators’ reaction; crisply summarizing the moment as ‘horrible’.

Sharjeel Khan’s 37 (14), including three-fours and four-sixes turned out to be the innings with the most impact in the game as Karachi cruised away to a 4-wicket victory. Earlier on, during Islamabad’s innings, barring Hussain Talat (37 off 30) and Phil Salt (25 off 19, none of the batsmen could get much going. Each of Umaid Asif, Iftikhar Ahmed, Arshad Iqbal, Imad and Chris Jordan claimed a wicket apiece. In response, Javed and the other United bowlers did come up with a spirited bowling comeback, collecting as many as six of Karachi’s wickets. Ultimately though, Umaid Asif polished off Karachi’s chase with a quick 6-ball cameo of 13-runs, hitting a six and boundary in the process. The victory sealed the Kings’ spot in the semi-finals, ascending them to the second spot on the points-table.

At the moment, the PSL 2020 stands out to be one of the few ongoing-cricket tournaments in the wake of COVID-19. Fans better be quick savor every bit of the remaining action though; as a revised itinerary draws curtains on the tournament next week on 18th March.