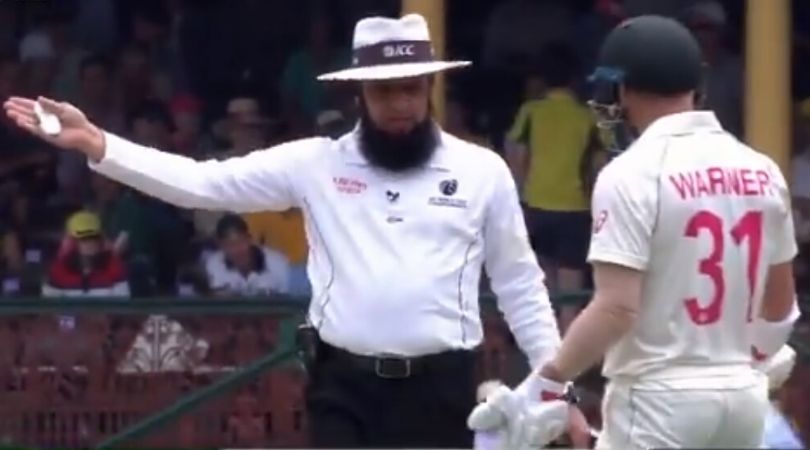 Aleem Dar Fined David Warner and Labuschagne For Running On The Pitch: On Monday, Team Australia won the three matches test series against New Zealand as they clean swiped with 3-0. Meanwhile, throughout the series New Zealand team didn’t look that much comfortable and lost all the three matches with a huge margin.

During the third and final match of the series, umpire Aleem Dar fines the Australian batsmen David Warner and Marnus Labuschagne for running on the middle of the pitch. In results, there was a deduction of five runs from Australia wallet for their mistake. However, the Australian opener seemed to have expressed his disagreement at the decision.

However, Australian player Warner was not at all happy with the umpire decision as we can see in the video. The official twitter handle of Cricket Australia has shared the video of the incident on their twitter handle. And also wrote in the caption, “Australia have been penalised five runs for running in the ‘danger zone’ of the pitch.” Here we are attaching the video of the same below.

Australia have been penalised five runs for running in the 'danger zone' of the pitch.#AUSvNZ | https://t.co/rx14Qs3S0i pic.twitter.com/sIEtazVcXl

In the third and final match of the series, Australia has beaten up the visitor’s team by 279 runs. Earlier in the first two matches, Australia won the matches by 247 and 296 runs respectively.