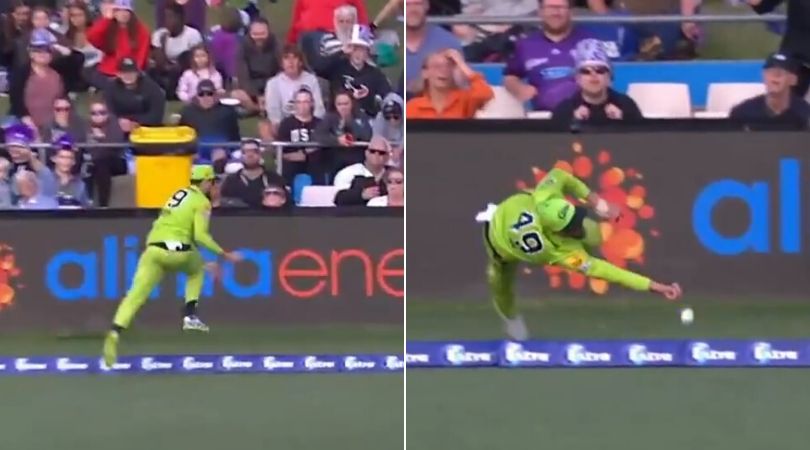 The highlights-reel of the Big Bash League 2019 keeps on expanding with each passing match. If the tournament hadn’t already witnessed a great amount of fielding-efforts, Alex Ross’ decided to add another entry to the list with his magnificent work at the boundary.

Although unsuccessful, Ross scores full marks for the amazing athleticism displayed. The incident happened in today’s match at the Bellerive Oval, where Hobart Hurricanes were hosting Sydney Thunders. The Hurricanes were rebuilding their scoreboard after they had lost opener D’Arcy Short in the match’s first over itself. For the Thunders, Gurinder Sandhu was bowling the fifth over of the innings. The second ball of the over; Hurricanes’ batsman Macalister Wright flicked the angling-delivery towards deep mid-wicket. Alex Ross ran to his left, all the way from the deep square-leg position. Ross extended both his arms to collect the catch, but the mometum pushed him out of the boundary rope. Desperate for the wicket, an air-borne Ross threw the ball back into the boundary and dived back in to complete the catch with one-hand. Except the ball barely slipped out of his palms and rolled away to the boundary.

The on-air commentator’s animated voice well-summarizes why the official Big Bash Twitter handle labeled the effort as, “nearly the catch of the millennium”! Enough said; take a look of the video yourselves to be mesmerized by Ross’ almost brilliant catch.

Alex Ross has nearly taken the catch of the MILLENNIUM! #BBL09 pic.twitter.com/GeEitKrl1r

Unsurprisingly, the Twitterati heaped massive praises onto Ross and his superb game-tactics.

Alex Ross almost pulled off one of the most unbelievable catches you'll ever see 😮 #BBL09 pic.twitter.com/NUygeqj0hI

Talking about the match, Wright survived the scare, and went on stitch a solid second-wicket partnership with his captain Matthew Wade. Both scored half-centuries, Wright scoring his second in three-matches, and powered the home-side to a strong score of 185/6. For the Thunders, the tournament’s leading wicket-taker, Daniel Sams continued on with his fine-form with figures of 4-0-34-4. In reply, the Thunders got bundled out for 128 runs in 17.3 overs, with only Alex Hales (63 off 42) and Ross (36 off 27) offering some resistance. D’Arcy short redeemed himself with the ball, as his leg-spin fetched him 5-important Thunders’ wickets. With his Man of the Match worthy performance, his team pipped the Thunders to the 5th spot on the points-table.