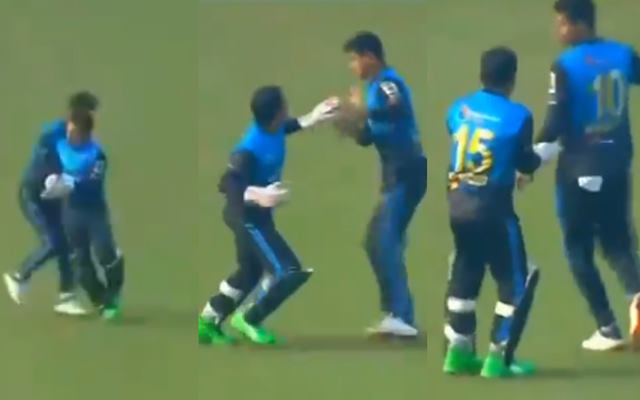 Monday’s Bangabandhu T20 Cup game between Dhaka and Barishal saw Bangledesh ‘keeper Mushfiqur Rahim at the peak of his anger. The former Bangladesh captain nearly managed to make his teammate Nasum Ahmed cry after barely missing out on missing a catch.

Barishal were into the 17th innings of their run-chase of Dhaka’s 150-run total. Needing 45 off the last 19 balls, and with 21-year-old Afif Hossain looking in good touch, they were still in with a chance to win.

For the over’s last ball, Dhaka pacer Shafiqul Islam dropped a length ball pitching on the middle stump. Afif tried to loft it over fine-leg but ended up mistiming the shot. Gloveman Mushfiqur dashed to grab the catch while Nasum, who was positioned at short fine-leg, also attempted. The two nearly ended up colliding and making a mess of the easy chance, but Rahim was able to complete the catch successfully.

But even with the wicket, captain Rahim wasn’t much impressed and made his frustration known in the most animate manner. His impulsive reaction was enough to make Naseem flinch! Thankfully, neither player did anything brash and were able to control their emotions just in time. Eventually, the other Dhaka teammates tried to placate their captain; while some tried to assuage Naseem’s nerves. Here’s the video:

Calm down, Rahim. Literally. What a chotu 🐯🔥

Despite all the drama, Dhaka managed to claim Afif’s wicket at the perfect time and narrowly walked off with a nine-run win. Shafiqul (3/39) and Muktar Ali (3/18) were their most successful bowlers. On the batting front, captain Rahim delivered quite a batting punch and scored 43. But it was Yasir Ali’s well-composed 54 off 43 that sealed the deal for Dhaka. Offie Mehidy Hasan (2/23) finished as Barishal’s best bowler. The result takes Dhaka to the qualifier against Chattogram, while Barishal’s campaign reached its end.