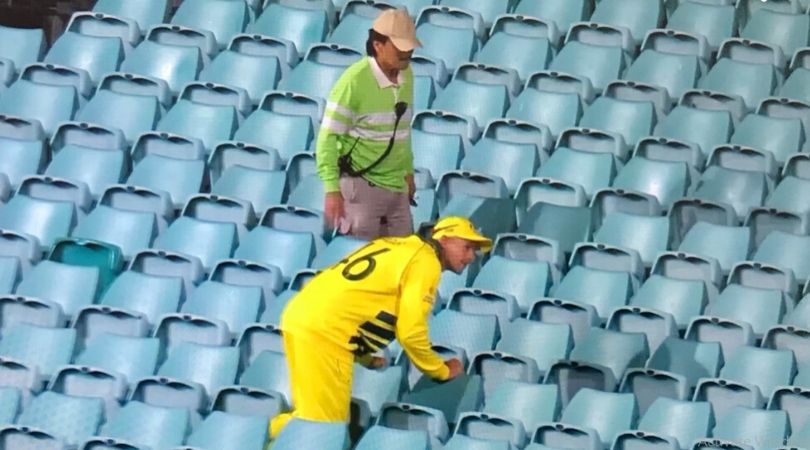 Ashton Agar Looks Out For Ball In Stands In Absence Of Spectators: The New Zealand team is currently on the tour of Australia for three matches ODIs series. Meanwhile, on Friday, in the first match of the series, Australia have beaten up the visitor’s team by 71 runs at Sydney Cricket Ground in Sydney. However, it is not because of the big marginal win that the Australian team is in the headlines but it is because of the empty stadium.

Actually, the coronavirus effect in the world is increasing at a vast speed. And in order to decrease the level of spreading all the countries are trying to avoid the mass gathering. Hence, in the ongoing Aus vs Nz ODI series, the first match has been played in the absence of the spectators. However, in the absence of the fans in the stand made problems for the players.

In the first innings, New Zealand fast bowler Lockie Ferguson was caught in search of the ball in the stands. It all not stopped here but thereafter in the second innings Australia all-rounder Ashton Agar performing a similar duty. These scenes are very unusual for the fans as well as for the players. Hence the videos of the incident are getting viral with vast speed.

The video of Ashton Agar looking for the ball in the empty stand has been shared by Cricket Australia on their official twitter handle. They have uploaded the video with the caption, “Like a needle in a haystack#AUSvNZ.” Here we are attaching the video of the same at the below of this article.

Earlier in the match, after winning the toss Australia opted to ball first at Sydney Cricket Ground in Sydney. Meanwhile, in the first innings, Australia managed to score 258-7 at the end of the 50 overs. From Australia, David Warner was the top scorer who scored 67 off 88 balls.

In the reply, the New Zealand team could manage to score 187 before getting all out in 41 overs. From Blackcaps Martin Guptil was the top scorer who managed to score 40 of 73 balls. Hence, New Zealand lost the match by 71 runs.