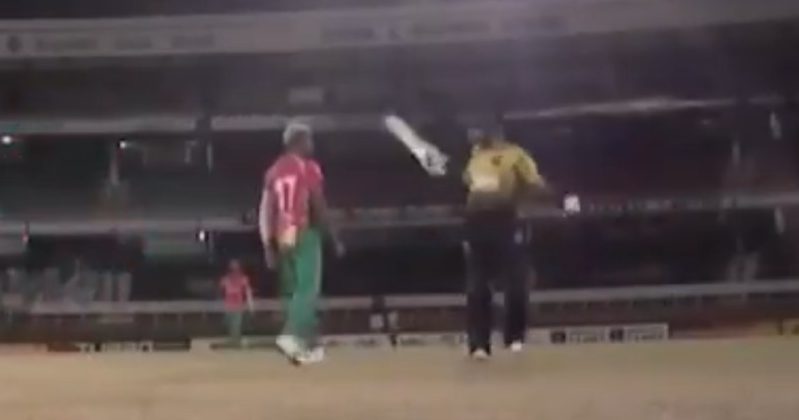 Pakistani batsman Asif Ali seems to have invited trouble upon himself after his dangerously hostile reaction towards Windies’ Keemo Paul. The two players got involved in a heated confrontation in yesterday’s CPL match after Keemo dismissed Asif; prompting the former to come up with a verbal send-off, while Asif ended up swaying his bat a bit too close near Keemo’s face. The mercurial right-handed batsman is now awaiting the disciplinary authorities to decide on his fate.

It all happened during the 8th over of the between the Jamaica Tallawahs and the Guyana Amazon Warriors. Ali, batting for Jamaica, miscued a back-of-the-length delivery from Paul. The shot still came off strong, though, so it looked like he’d survive; but Guyana’s skipper Chris Green had some other intentions. The captain came charging down from long-on to mid-on, where he completed a stellar, running catch to send Asif back to the hut with just 3-runs to his name.

Guyana had been desperately needing a breakthrough- getting one in the form of Asif’s wicket certainly excited them. None more than Keemo, who seemed a bit too flared-up, and proceeded to give the departed batsman a send-off. Certainly not the best way to convey emotions- but Asif’s vehement reaction to the sledging stirred fans much more. The video shows that Asif swatted his bat in frustration, barely avoiding Keemo’s face by mere centimeters. This caused Keemo to further say a few words, while the on-air commentators could only gasp and wonder what match referee Reon King would have to say about all this. Here’s the video:

Speaking of the match, Asif’s dismissal did briefly open a window for the Warriors, but they couldn’t effectively cash on to the opportunity. In the end, Nkrumah Bonner (30 off 32) and Andre Russell (23 off 20) fostered a solid, unbeaten, 51-run-partnership for the sixth wicket to steer their side home. Mujeeb ur Rahman, with figures of 4-1-11-3, claimed the Man of the Match honors. The win takes Jamaica to the fourth spot on the points table. Guyana, although tied with Jamaica on points, remain on the third spot, courtesy of their better Net Run Rate (NRR).