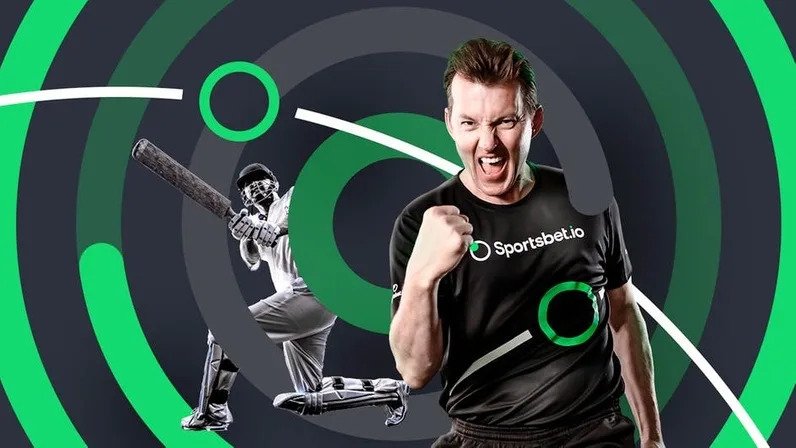 Online cryptocurrency-based sports-betting platform Sportsbet.io are pleased to announce that former Australian speedster, Brett Lee, has joined their team as the brand ambassador. On Saturday, the bitcoin-betting giants roped in ‘Binga’ as their commercial face on a two-year deal.

The 2003-World Cup-winning Australian quick has quite a strong affinity towards sports and entertainment; back in a 2005-ODI match, Lee had clocked a staggering 161.1 km/h (100.1 mph) peach against New Zealand. Add to that repertoire some of his funky Bollywood projects like the film UNIndian and his musical collaborations with the legendary Indian Bollywood singer, Asha Bhosle. Truly the perfect candidate for Sportsbet.io’s ‘fun, fast, and fair’ sports promotions.

Performing his job as the brand-ambassador, Mr. Lee will engage in the website’s popular online-betting fantasy game, aptly called “Bet with Brett”. Additionally, he will feature in Sportsbet’s ‘Awesome Foursome’ cricket quizzes featuring exclusive casino cashback rewards for the winners. Fans will also have the privilege to tune into Mr. Lee’s in-depth cricket-insights on his Sportsbet-exclusive video-podcast series.

Speaking about the developments, Brett conveyed his excitement on joining Sportsbet’s passionate sports-loving team. “Speed was always my greatest weapon throughout my career, which is why partnering with Sportsbet.io is such a perfect match. And like Sportsbet.io, playing fair was always important to me.

“These guys make sports betting fun, fast and fair, so I can’t wait to get involved with some exclusive promotions and provide some insight from my experiences at the very top of cricket,” he said.

Justin Le Brocque, head of Sportsbet’s Sportsbook Marketing resonates with Mr. Lee’s enthusiasm. “Brett is nothing short of a legend of the game. There were few greater sights in cricket than watching the fear in the eyes of batsmen as Binga approached. So we are bowled over that he has joined team Sportsbet.io. As well as a terrifyingly quick bowler, Brett is a natural entertainer and a true gentleman; we couldn’t think of a better match for our sportsbook.”

“Players around the world can look forward to some fantastic Brett Lee promos, and the chance to hear from one of the biggest characters in the game.”

Incepted in 2016, Sportsbet has already made its mark into the global sporting arena with its popular fantasy partnerships with events like the Brazilian and Copa Libertadores champions Flamengo. Alongside those roles, the organization has also partnered with the English Premier League’s Watford FC and the European CONFIFA Football Cup as title sponsors. Mr. Lee’s addition to the Sportsbet team will most certainly be a strong, first step for the website to make its foray into the exciting world of cricket fantasy-contests.