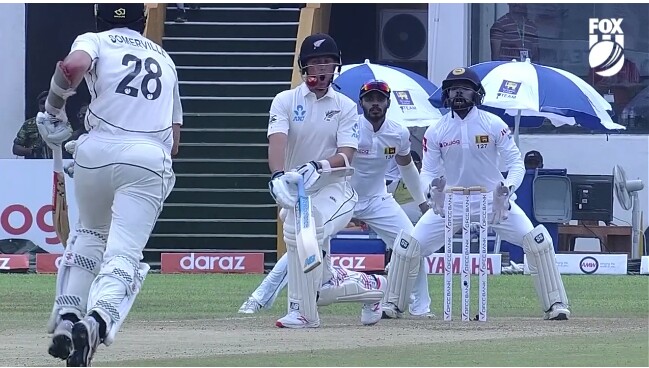 New Zealand is currently on the tour of Sri Lanka for 2 Matches Test Series and 3 Matches T20I. During the 1st Test match, one of the funny incident took place. A Ball stuck into the helmet of Trent Boult while he was trying to scoop the ball. Meanwhile, the fielders and wicket keeper tries to make fun of the incident as they tried to catch the ball.

In the return Sri Lanka have reached at the score of 227 for 7 while the stumps for the second day called off. Kusal Mendis and Angelo Mathews scored fifties and helped the team. Currently, Sri Lanka is trail by 22 runs with 3 wickets remaining in the 1st innings.

Ball Stuck Into The Helmet

While Trent Boult tried to scoop the ball, the ball get edged with bat and it stuck into the helmet. All the fielders and wicket keeper have not took their feet behind in making the moment special. They all tried to catch the ball from the Helmet and even the commentators have done a good job in making the moment funny. Trent Boult also tries to escape himself from the fielders. Despite of this Trent Boult scored a decent innings of 18 runs and helped the team in reaching to 247 score.

Here is the video of the funny incident

WATCH: Boult edges ball to stick into grill of his helmet

In the Video we can see how fielders are looking to make the moment funny. Even Trent Boult is trying to escape from them.