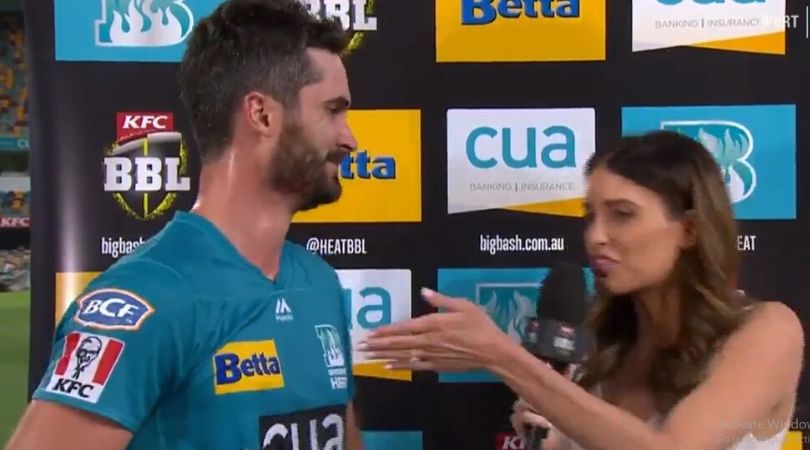 During the 29th match of the ninth edition of the ongoing season, Ben Cutting and wicket-keeper batsman Jimmy Peirson played 60 run partnership for the fifth wicket. And hence Brisbane Heats made fourth consecutive victory in the tournament. Ben Cutting was awarded ‘Player of the Match’ for his unbeaten knock of 43 off just 29 balls.

In the post winning Match-Presentation, speaking to his wife Erin Holland, Ben Cutting was involved in a hilarious conversation. It was a special moment for the couple.

“Look, I said it to you before the game that any danger of getting a few runs so I actually get to talk to you for once. So, thank you for listening to me for the first time in your life,” Holland was quoted as saying amusingly to Cutting at the beginning of the interview.

Admitting the batting collapse in a small chase, Cutting was wax lyrical about Peirson for playing a “serious knock”. “We made it hard for ourselves with the bat again. The way Jimmy Peirson played at the other end … can’t forget him … it was a serious knock from him. Pretty tricky wicket,” Cutting said.

Now after four consecutive wins in the ongoing season of the Big Bash League, Brisbane heat will play their next match on against Perth Scorchers at Perth Stadium. Speaking on this Erin Hollard gives a warning to her husband in a hilarious way. She warned Ben Cutting don’t come home if he fails to deliver performance in the next match.

7Cricket on Twitter has shared the video of the incident with the caption, “Rest up and play well in Perth … or don’t come home! @erinvholland with @Cuttsy31 #BBL09.”

Here is the video of their conversation

"Rest up and play well in Perth … or don't come home!"@erinvholland with @Cuttsy31 😂 #BBL09 pic.twitter.com/FNPaTEQ44Q