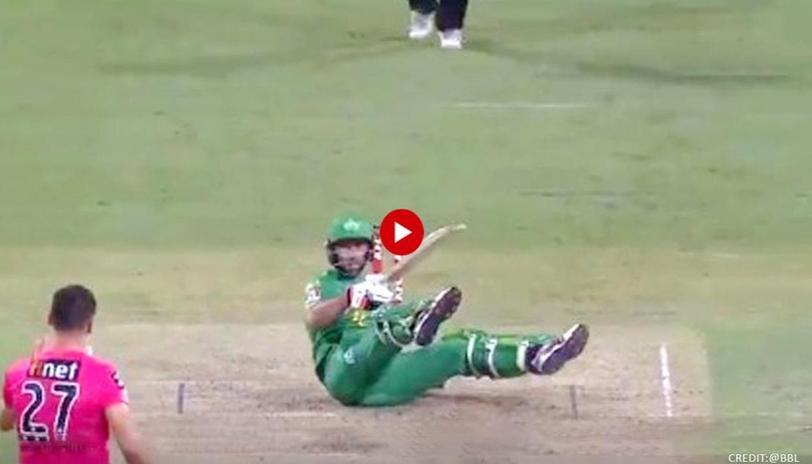 There has been action galore in the ongoing edition of the Australian Big Bash League. From one, breath-taking batting innings to a spell of extreme, bowling dominance-fair to say that the fans have seen  every aspect of cricket action on-field. At times, however, the fiery intensity might be too overwhelming for the players’ taste. Glenn Maxwell almost got of a taste of such a spicy moment in today’s game between the Melbourne Stars and the Sydney Sixers.

Stars had a uphill climb ahead of them as they required 62 runs off the last 25 balls. Sixers’ Ben Dwarshuis was one-ball away from finishing the innings’ ninth over. Up until this point, Dwarshuis had been the pick of the bowlers for the home-side. After bowling an amazing maiden-wicket over in the power-play, he successfully replicated his magic in this over with the wicket of Nic Maddinson. Stars captain Glenn Maxwell had arrived latest to the crease, and had only faced a single ball in his innings. That’s when Dwarshuis created an insane moment in the match with this blinder of a delivery.

Apparently, the ball had slipped of Dwarshuis’ hands at the last moment. The resultant delivery was a quick-paced beamer headed right towards the on-strike Maxwell. Fortunately, Maxwell raised his bat right in-time, and parried the ball away to avoid what could’ve been a life-threatening blow. Here’s a video of the freaky moment:

The impact of the block made Maxwell fall to the crease, as players from both the teams immediately rushed to his aide. Sixers’ spinner helped Maxwell to stand back on his feet, while an equally concerned Dwarshuis consoled him. Naturally, Dwarshuis had to bowl the delivery again, and Maxwell made good use of the free-hit by collecting a boundary.

The Stars ultimately fell 21-runs short in their chase, which broke their 8-match long winning streak. Marcus Stoinis top scored for the visitors with 62-runs, further affirming his spot at the top of the leading run-scorers chart. The home-side’s skipper, Moises Enriques emerged as the Man of the Match thanks to his power packed innings of 72 of 31 balls. With the win, the Sixers pipped the Adelaide Strikers to the second position on the points table. The Stars, despite the loss, still comfortably occupy the top spot of the table.