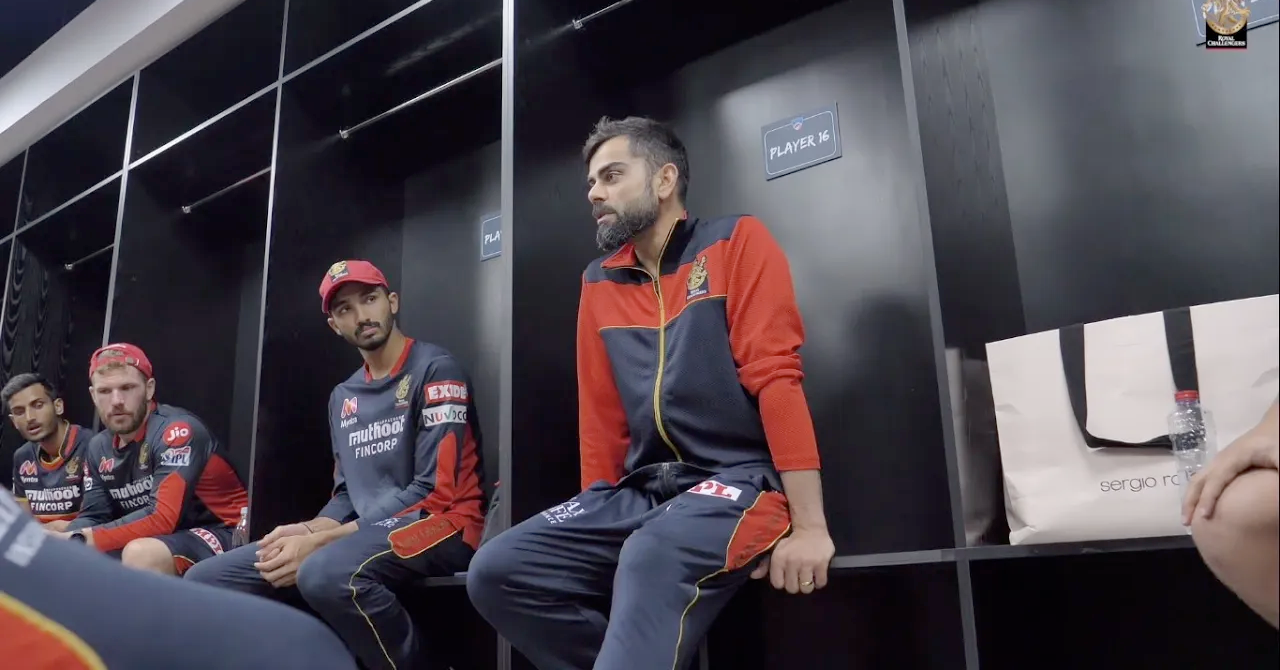 A crushing 6-wicket defeat in the Eliminator at Abu Dhabi brought an end to the Royal Challengers Bangalore’s (RCB) 2020 IPL campaign. The Sunrisers Hyderabad (SRH) overcame a spontaneous middle-order collapse and dextrously chased down their 132-run target. The result knocked RCB out of the tourney, while SRH will now advance to compete in the second qualifier against the Delhi Capitals (DC).

The RCB batting unit was rather unfortunate to have Murphy’s Law caught up with them at the worst possible time. Batting first, the team fell prey to SRH’s fiery bowling exhibition as they suffered through a spontaneous batting slump. Barring AB de Villiers (56 off 43) and Aaron Finch (32 off 30), no other RCB batter was able to come up with a run-scoring intent. Their scoreboard ended at a well-under-par 131/7.

Coming to SRH’s chase, things weren’t looking too promising for them either, as they lost a couple of quick wickets in the powerplay. Those dismissals, coupled with a spirited spin-bowling strangle from Adam Zampa (4-0-12-1) and Yuzvendra Chahal (4-0-24-1), opened a slight avenue for RCB to make a comeback. But in the end, it was Kane Williamson (50* off 44) and Jason Holder’s (24* off 20) calming presence in the crease that helped them successfully finish a last-over chase.

The loss clearly had an emotional effect on RCB’s morale, evidenced by some of the viral post-match dressing room videos that started circulating shortly after the game. Captain Virat Kohli was at the centre of RCB’s emotions, as he, accompanied by several other RCB staffers, delivered a motivating speech to his teammates. The Bangalore skipper addressed several key aspects, like their first-time experience playing in a bio-bubble, while also lauding the team for its first playoff appearance in 4 seasons.

“We spoke of creating memories as a team and I think we have done that a lot this season and when we said that this is probably the best environment we’ve played in for RCB, we’re damn right about it,”  Virat said.

“It has been an amazing time together. We came in three weeks before the tournament started. Got to spend a lot of time with each other, got to know each other so well. I think the camaraderie is something that pushed us deep and far into the tournament and something that we can be proud of. In the end, it’s about holding our heads high. Even the losses that we had, we never out-and-out gave up. I think that’s the most important thing, which probably we haven’t done in the last few seasons.”

“Really proud of how we regrouped after some tough seasons. Lots of positives for next year”- Kohli

Captain Kohli was also quick to focus on the team positives, despite suffering through a collective lean run in the second half of the tourney; a run that saw them lose 5-matches on trot. “So those are a few positives already for me. We’re heading in the right direction, and I would just like to thank the support staff and everyone else involved.  The coaches, especially; you guys have created a brilliant structure this year. The hard work, the planning, and the detail has been outstanding and something that we all thoroughly benefited from.

“Next year probably things might be different. Might have a few more allowances; we never know. But still, long as we keep looking forward to return as a stronger group, and enjoy our time together; we’ll have one hell of a tournament next year as well,

“We can be really proud of what we’ve done. The last few seasons that were tough for us. From here on, it’s only down to the character of all of us in the change room. So just hold that close in your heart and keep growing from here. Let’s all believe that we can keep building on from here as a sport,” captain Kohli concluded.