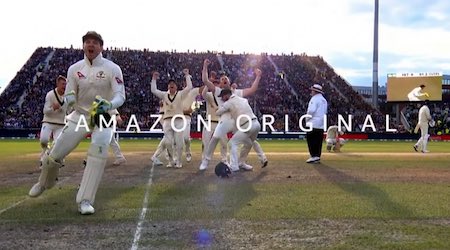 Over the years, the cricket fan-base has experimented with a variety of ideas to spice up the flavor of the classic, gentlemen’s game. Talk about the popularity of biopics on cricketers. Or the success of popular cricket podcast and radio shows. There’s been a lot of emphasis on all that goes on behind the 22 yards on television, much to the cricket fan’s liking.

With time, more communities have discovered this formula for success, and developed their own cricket-themed documentaries. Business super-giants Amazon are the latest ones to hop on this cricket-off-the-camera bandwagon. The Australian Cricket Board, Cricket Australia (CA) released a series of videos earlier today featuring the Australian Cricket team. The series is a trailer for Amazon Prime’s documentary on the men’s team, aptly titled “The Test”.

“The Test” narrates the Australian men’s cricket team’s challenging journey over the past couple of years. The documentary covers the upward rise of the team ever-since their reputation took a beating with the infamous ‘sand-paper’ gate in Cape Town back in 2018. Their captain and vice-captain of the time, Steve Smith and David Warner, each copped year-long bans for their involvement in the heinous act of tampering with the ball. Opening batsman Cameron Bancroft, who performed the said act on field, also received a 9-month ban. Over the period of the next 12-months, the team entered into a phase of redevelopment, with Cricket Australia aiming to re-dignify the team’s dressing room culture. The team went through a challenging time on-field, as they missed some of their most important players.

Things started to improve, however, once their new captains Tim Paine and Aaron Finch, alongside coach Justin Langer started to instill a new, respectful culture into the side. Against all-odds, Australia bounced back to form right before the World Cup and made it to the semi-finals. The documentary concludes with the iconic Ashes series the team played last year against arch-rivals England. With Smith, Bancroft and Warner back in the team, the Australians gave their English hosts a good run for their money. The 5-test series finished 2-2, with a match drawn. In the process, captain Tim Paine became the first Australian captain to retain the Ashes urn in 18 years.

The video-trailer, however, conveys the emotions of the grueling, Australian journey at its best. The video features footage of England’s fastest bowler of the series, Jofra Archer, bowling to Smith. Archer had already made a name for himself last month back in the 2019 World Cup. His aggression and fiery-pace had helped England win the tournament for the first time. Thankfully, none of the two parties disappointed, as Archer breathed fire on a defiant-standing Smith. At one point, Archer jabbed a quick delivery right at Smith’s elbow. Smith grimaced, re-adjusted his defense with an arm-guard and resumed his gritty performance.

The moment of highlight came when a short-pitched ball from Archer hit Smith plumb on his helmet. The impact of the blow caused Smith to stumble on the pitch, while players and officials ran in from all corners to help him. A reluctant Smith had to walk-off the field, with his teammates and coach lauding him for his resilience. His departure enabled England to fight their way back into the match, as they soon picked up some quick wickets. That’s when an unwavering-Smith decided to charge into the rescue act, battling his pain and the jeering from the English crowd. Smith stood firm in an attacking-display of batting, clobbering the English bowlers. “Defending was just the hardest thing to do”, Smith recalls in the video. Ultimately, a plumb Chris Woakes’ yorker got the better of Smith, as he walked back after compiling a hard-fought 92 runs.

The 5-minute long video features the viewpoints of coach Justin Langer, Steve Smith himself, alongside his teammates Peter Siddle and Marnus Labuschagne. “The Test” premiers on Amazon Prime from March 12 2020. For now, mesmerize yourselves with this drama-packed intense trailer.

Watch the dramatic scenes unfold in the Aussie camp during the epic Ashes battle between Steve Smith and Jofra Archer at Lord's.