Pakiatan pacer gets involved in physical altercation with crowd after they provoke him. 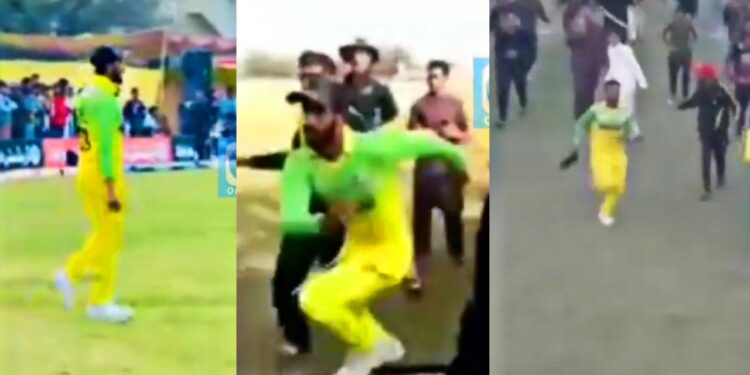 Pakistan’s pacer Hasan Ali got engaged in a physical altercation with local spectators during a club match at Arif Wala.

Hasan Ali was playing a local club match on Sunday in Arif Wala. A video of the game has gone viral on social media in which the local spectators can be heard teasing Hasan Ali for not being part of the Pakistan squad. The crowd also made fun of his infamous drop of Mathew Wade during the 2021 T20 World Cup semi-final clash against Australia.

The Pakistan pacer lost his temper as he heard the crowd hurling teasing comments on him. In the viral video, Hasan Ali can be clearly seen getting involved in a physical banter after losing his cool. The 28-year-old pacer was also seen charging towards the fan who mocked him for losing his place in the Pakistan side.

Things didn’t stop here as the mob allegedly tried to attack him after the game ended in Arif Wala, a city in the Pakpattan District of the country’s Punjab province. Hasan Ali fled quickly off the field in order to avoid any mishappening and reached his car to drive off from the ground.

He fled the field quickly after the game ended as the mob allegedly tried to attack him!

The experienced pacer last played for Pakistan in the Asia Cup final against Sri Lanka as a couple of front line Pakistan pacers including Shaheen Shah Afridi were injured. He conceded 25 runs in his 3 overs and couldn’t pick any wicket. Sri Lanka eventually won the match by five wickets. Ali wasn’t selected for the T20 World Cup in Australia as selectors picked in-form young pacers for the marquee tournament.

Hasan Ali’s overall test record is quite good as he has already claimed 77 wickets in just 21 Tests. However, he was also not picked in the Test squad for the ongoing home series against England as he has taken just five wickets in his last four Tests against Australia and Sri Lanka.