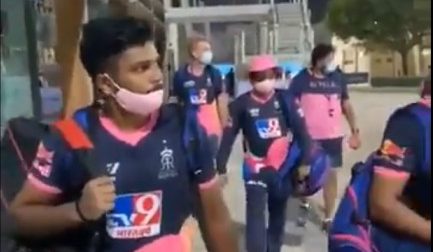 The 2020 edition of the IPL is less than a fortnight away, but the franchises have already started their witty, pre-season banters. Rajasthan Royals and Chennai Super Kings gave their fans a similar, light-hearted moment yesterday night; when the Royals uploaded an excerpt of their training video footage on Twitter.

The Royals were taking a break after their practice session; some of their players and staff-members were casually walking around the ground. At some point during their casual stroll, the Royals passed by the Super Kings’ camp. But apparently, MS Dhoni’s team had just started practicing and couldn’t be distracted by the Royals relaxing. Rajasthan decided to project their opposition camp’s dedication to the public domain and posted the footage on their Twitter account.

In response, the CSK management came up with a reply that emphasized the “All work and no play makes Jack a dull boy” proverb. Also, extra points to their social-media team for finding this relevant, jersey-color themed meme.

CSK and RR each have player availability issues

The fit CSK members have already started their preparations; which sure bodes well for their fans, who were mildly disturbed by all the happenings around the team last week. The CSK management hasn’t yet commented on the status of their 13 staff members who previously tested positive for COVID-19. Additionally, they’re yet to announce replacements for Suresh Raina and Harbhajan Singh, both of whom pulled out of the tournament.

Rajasthan, meanwhile, have their player availability issues to address. The ongoing LoI series between England and Australia will most likely affect the full-time availability of some of their marquee stars; like Steve Smith, Jos Buttler, Jofra Archer, and Tom Curran. Additionally, their star English all-rounder Ben Stokes is presently stationed in New Zealand, where he is tending to his ailing father who was recently diagnosed with brain-cancer. Given the tragic urgency of his situation, it seems as though Stokes won’t be able to play for them this season.