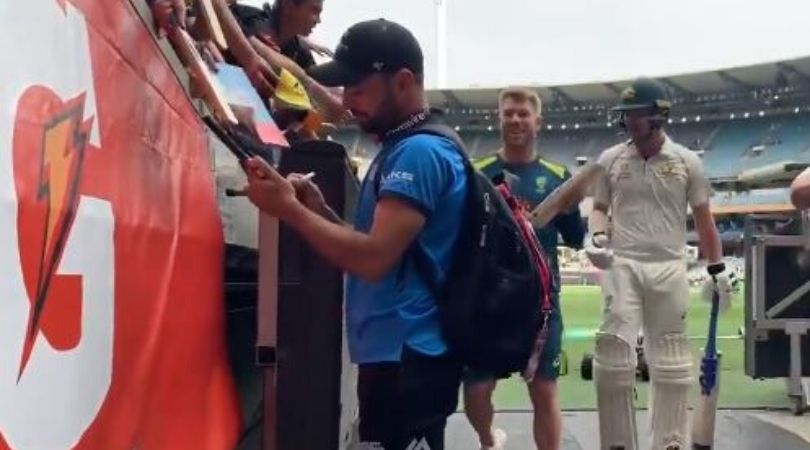 David Warner epic reaction after seeing Rashid Khan at MCG: On Sunday, Australia claimed another Test series win after defeating New Zealand in the second Test match of the ongoing three matches Test Series. Australia has defeated the visitor’s team with a huge margin of 247 runs. And now both teams have to play the third and final match of the series from January 3 at Sydney Cricket Ground in Sydney.

On the other hand, the Australian Big Bash League (BBL) is currently at its apex stage. Meanwhile, on Sunday, Afghanistan’s star bowler Rashid Khan was also at the MCG Stadium. Actually, he was there for the 15th match of the ongoing BBL season which was played between Adelaide Strikers and Melbourne Renegades.

Amidst of all, Australian opener David Warner spotted Rashid signing autographs of the fans at the stadium, the Australian batsman immediately went onto the Afghan bowler. In Indian Premier League (IPL) which players are currently the part of the same team i.e. Sunrisers Hyderabad. Warner playfully tried to hit Rashid Khan with the bat before the latter turned back.

SHORT SUMMARY OF THE MATCH (ADELAIDE STRIKERS VS MELBOURNE RENEGADES)

Earlier in the match, after winning the toss, Adelaide Strikers decided to bat first at Docklands Stadium in Melbourne. Meanwhile, batting first Adelaide Strikers manage to score 155-6 at the end of the 20th over. From Strikers the opener Philip Salt was the top scorer as he scored 54 off just 26 balls.

In the reply, Melbourne Renegades could manage to score only 137-8 at the end of the 20 overs and lost the match by 18 runs. Skipper Aaron Finch scored 50 runs off 39 balls but was unable to help the team to win the match. Adelaide Strikers’ bowler Rashid Khan awarded with ‘Player of the Match’ for his extraordinary spell as he only gives way 15 runs in four overs and also took 2 crucial wickets.