Watch: David Warner gets hit by bail in the groin after SL batter gets clean bowled

Australia's dominance on Sri Lanka ended in the first session of the third day as the visitors finished the game with a victory. 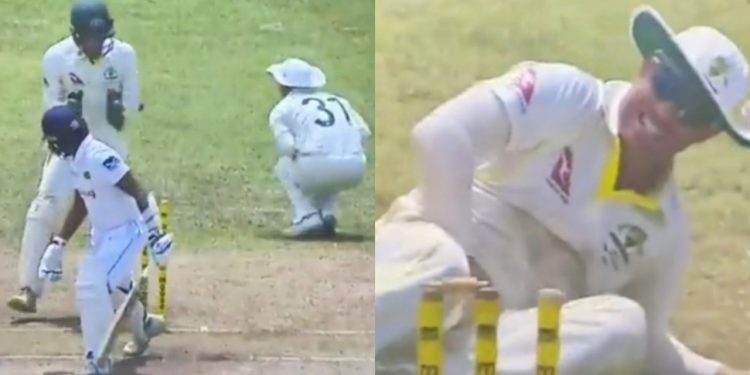 The first Test between Australia and Sri Lanka ended with a victory for the visitors after they dominated the Asian team from Day 1. The match got over only in the first session of the third day which tells us how fast the game moved. When Aussie players were dictating the terms, there was a moment where David Warner gets hit by a bail in the groin and the southpaw went down in pain.

David Warner gets hit by a bail

The SL vs AUS game got over in the blink of an eye as the game didn’t even make it to the second session of the third day. The Australian bowlers proved to be too good for the SL batsmen who looked clueless, especially in the second inning. The first session of what’s called the moving day of a Test match, saw Aussie bowlers bundling up the SL batting line-up. It was during one of the wickets that David Warner gets hit in the groin by a bail.

The moment came in the 22nd over of Sri Lanka’s second inning when part timer Travis Head was bowling to Vandersay. SL had already lost 8 wickets, reeling at 108-8 and received another blow in the form of Vandersay’s wicket who got clean bowled by Head. The bowler tossed up the delivery outside off which turned in past the inside-edge of Vandersay who tried to push the ball.

The batsman was deceived by the delivery which clipped the leg-stump and the bail deflected off it to hit David Warner who was patrolling at leg-slip. The bail flew and hit Warner in the groin after which the fielder got down in pain. This was the third wicket for Head and the ninth wicket down for Sri Lanka. The bowler picked up yet another wicket on the fifth delivery of the same over which brought an end to the Sri Lankan inning, giving a nothing-target of 5 runs to Australia.