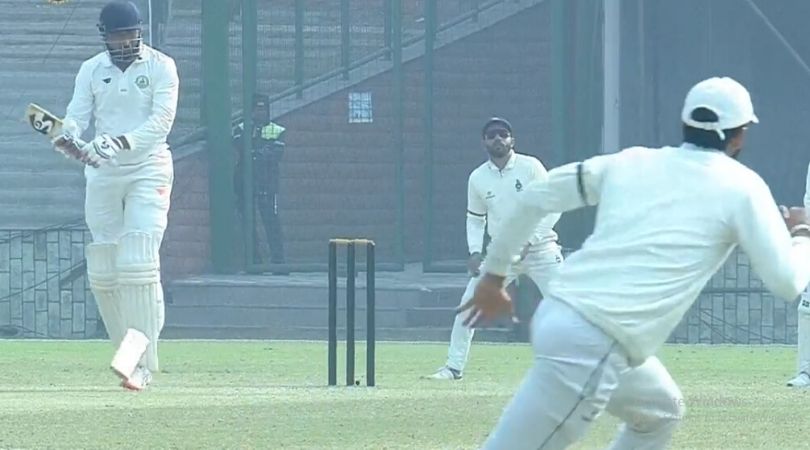 The incident happened during the 38th over of Vidarbha’s innings in their away-Ranji Trophy match at Delhi. Up-until that point, Wasim was apparently having some issues with his bat. The seasoned batsman had already signaled for different bats multiple times during his innings. However, Khejroliya’s spicy delivery ultimately enforced a change of bat for Wasim. In the over’s penultimate ball, Jaffer guided away Khejroliya’s delivery for a single to the on-side. And quite spectacularly, the apparently not-too-severe impact of the strike was enough to split Jaffer’s willow into two-pieces. Jaffer had to, for the umpteenth time on the day, request for a new bat. Here’s the video of the incident:

The match so far

Despite the little ‘bat-break’, Jaffer stood firm on his end and struck 4-boundaries in his innings to compile 40 runs of 71 balls. The reliable Vidarbha number-3 batsman has personally enjoyed a good match. His innings of 83 runs in the first innings upped his first-class half-century tally to an impressive score of 90. As for his team, they’ve slowly made their way back into the match. After bundling-out for 179 in the first innings, the Vidarbha bowlers struck back to bowl the home-side out for 163. They fared much better in the second innings, where Ganesh Satish’s century and Akshay Wadkar’s 70 helped them to declare at 330-3. In reply, Delhi openers Kunal Chandela and Hiten Dalal are presently batting at 10-0.

Delhi would be eagerly eyeing to win the match and advance from their 10th position on the Ranji Trophy’s Elite Group A & B points-table. Defending champions Vidarbha, meanwhile, would aim to get back to their dominating best. The victory would add 6 points to their tally, propelling them to the top from their current fourth-position.

WATCH- Sam Harper and Nathan Ellis Had A Nasty Collision In BBL 2019-20
WATCH- Siddarth Kaul Bowls A Beauty To Samit Gohel; Batsman Survives Despite Stumps Flying In The Air
To Top