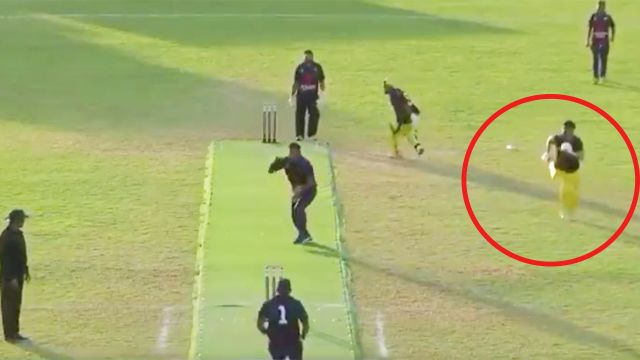 Time and again, the Gentlemen’s game produces some bizarre moments and talking points that defy every bit of logic and common convention. The European Cricket Series (ECS) recently delivered one such mind-boggling instance. A T10 contest between the Pakcelona CC (PCC) and Catalunya Tigers (CTT) ended in a nail-biting tie after the former scored two of the three required runs off the last ball.

The fact that a relatively low-key, European cricket contest went down to a final-over finish is quite an enigma in itself. But what really defined the game’s competitiveness, was Pakcelona’s daring last-ball stunt. In a desperate attempt to save the match, the PCC batsmen ran two-runs of the last ball to take the match into a tiebreaker; while the ball was still in CTT’s wicketkeeper’s possession!

Being able to run even a single while the wicketkeeper controls the ball is quite a commendable feat. PCC, however, went one step further to challenge the logistical odds. It all started with Pakcelona’s Adalat Ali taking a wide swipe at the ball- in a likely attempt to score a boundary- to score the 3-runs required to win the match. Sadly, the hit didn’t connect, so he, and his non-striker Azeem Azam, had to be content with running a single-bye. In the meantime, the Catalunya’s ‘keeper, Davinder Singh Kaur, had safely collected the ball behind the stumps.

The match looked all but dusted when Adalat, from the non-strikers end, decided to do the unthinkable. Totally disregarding CTT’s keeper, and his active presence on the field; Adalat charged down from the opposing end to complete a second run! Azam, meanwhile, kept signaling his partner to go back to his crease ASAP. But Adalat was in no mood of heeding his words and successfully crossed to the other end!

The peculiarity of the situation finally knocked some sense on to Azam, so he too decided to reciprocate by running the second run; well after his partner had already made his ground. CTT’s ‘keeper, meanwhile, looked totally perplexed with what was happening. Soon as Azam charged to complete the second run, Davinder lobbed the ball to the bowler. But it was already too late by then. The bowler tried an uninspired direct hit at the stumps; which missed, while Azam valiantly completed a match-saving run.

The written transcript does seem quite complicated, so we’ll just leave you to watch the events unfold in this hilarious video clip. Also, a special shout-out to the commentators for their hilarious reactions to the incident.

SCENES! 2 to tie off last delivery, ball in wicket keeper hands and need another run. WHAT TO DO?? 🏏🇪🇸 pic.twitter.com/xFQuaUOreu

Sadly, Pakcelona’s incredible match awareness still couldn’t help them sealing out the match. The ECS’ rules declared that a tied game would go down to a Golden Ball to decide the winner. Essentially, the chasing team would face an extra delivery. If they scored two-runs or more in the golden ball, they would win the match. And PCC couldn’t quite repeat their daring two-run stunt when it mattered the most- managing just a solitary run. Catalunya Tigers narrowly ended on the tie-breakers winning side.