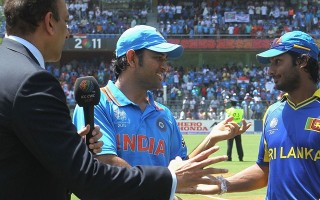 The Sri Lankan cricket fraternity has been brewing with controversy ever since former sports minister Mahindananda Aluthgamage accused the Sri Lankan cricket team of ‘fixing’ the iconic 2011-World Cup final. Aluthgamage’s statement forced the Lankan government to initiate a criminal probe on the situation; which, consequently, resulted in six, veteran, former members of their team being taken into questioning.

Reports suggest that the likes of former captain Kumar Sangakkara and Mahela Jayawardane, among several other players; had to appear in front of the Sri Lanka Cricket’s (SLC) anti-corruption unit for a grilling, five-hour-long interrogation. Sources close to the authorities have conveyed that the SLC and the police have dropped all charges, which, for the time being, which should bring an immediate end to the investigations.

But from the reaction of the Lankan cricket fans, the damage seems to have been already done. On Thursday, members from the Samagi Jana Balawegaya (SJB)’s political alliance led an emotional protest against the Lankan government’s shameful treatment towards its legendary players. As per reports, several participants from the SJB’s Youth Alliance gathered around the sports ministry yesterday and raised slogans against the SLC for taking Sangakkara into question.

Members of the Samagi Tharuna Balawegaya (@youthforsjb) are currently staging a protest outside the SLC against the harassment Cricketer Kumar Sangakkara and 2011 cricket team. #SriLanka #LKA #Matchfixing #ProtestSL via @kataclysmichaos pic.twitter.com/BfOr6tcsOK

SJB official Sajith Premadasa also threw his weight behind the maligned-Sangakkara. He took to his Twitter account to make a tweet that urged Lankan citizens to ‘strongly oppose’ the Government’s ‘deplorable behavior’ towards Sanga.

Continuous harassment of @KumarSanga2 and our 2011 cricket heroes must be strongly opposed. Government behavior is deplorable.

The entire controversy behind the 2011-final stemmed from some shocking comments Aluthgamage recently made over on a TV show. “I tell you today that we [Sri Lanka team] sold the 2011 World Cup. Believe me, I tell this with complete responsibility. I don’t want to divulge too much for the sake of the country. But I will say that we could have easily won the final match against India, but, sadly, our players betrayed us,” he had said.

While these rumors around Lankan players fixing the match are entirely new, certain disputable aspects lend some context to the erstwhile Lankan minister’s claims. For one thing, many fans accuse match referee Jeff Crowe of having conducted the toss ‘unfairly’. As per some renowned names in the fraternity, Crowe had, allegedly, not heard Sangakkara’s original pick ‘heads’ during the toss; which forced both the teams to do a second coin-toss, that Sangakkara had won.

As for the match, opting to bat first, Sri Lanka posted a formidable total of 274/6 thanks to vice-captain Mahela Jayawardane’s stellar century. In response, India chased the target with 10-balls to spare. Gautam Gambhir (97 of 122) and Indian skipper MS Dhoni (91* of 79) led the hosts’ victory charge.