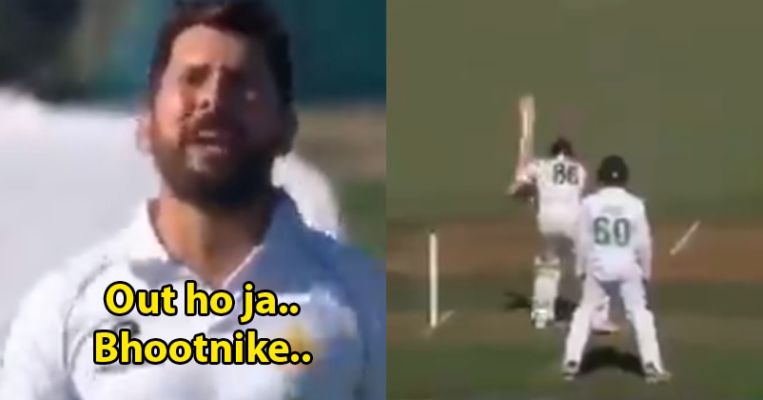 Day 1 of the ongoing Boxing Day Test between Pakistan and New Zealand at the Bay Oval produced an interesting bit of commentary from leggie Yasir Shah. Bowling against Henry Nicholls, Yasir gave meme-makers a moment to savour when he expressed his blatant frustration on the former’s batting prowess.

For context, New Zealand ended Day 1 on 222/3; thanks to hefty contributions from Kane Williamson (94*), Ross Taylor (70) and the aforementioned Nicholls (42*). Williamson, in fact, went on to score his 22nd test ton to buoy the Kiwis first innings total to an impressive 431/ 10. Ross Taylor, meanwhile, acclaimed a personal record milestone by becoming the most-capped New Zealand test player, with 103 caps.

But for as glorious as NZ’s senior pros’ domination was, it was the 29-year-old Nicholls who got involved in the hottest news story from the match. The Pakistani bowlers had endured a stressful day on-field, with a bunch of sitters and wicket-opportunities going down. And in the end, the frustration finally got to Yasir’s nerves.

Bowling in the 77th over, Yasir beat Nicholls bat and almost managed to get a nick to skipper Mohammed Rizwan positioned behind the stumps. The ball missed by the narrowest of the margins; just summing up the dismal kind of day the men-in-green had experienced in the match until that point. Both Williamson and Nicholls received reprieves early on in their innings. And as the final scoreboard clearly shows- they made merry on their redemption(s).

Frustration gets the best of Yasir Shah; hurls slang at Henry Nicholls

A stressed-out Yasir finally let all the angst inside of him in between one of the deliveries. The stump mics caught him annoyedly say, “Out ho ja, bhootni ke”. (T: Just get out, god darn it!).

In recent years, the International Cricket Council (ICC) has adopted a stringent approach to regulate players’ on-field behaviour. The likes of Sohail Tanvir and Kagiso Rabada had to even cop match bans and demerit points for using profane language during the live match.

What’s interesting is that Yasir’s language, while not overly refined, didn’t have any derogatory connotations to it. Well…at least none, that we, as hawk-eyed external viewers can pick up from the outside! So it’s fair to assume that the ICC will allow Yasir to enjoy this one.  However, Twitterati didn’t leave any stone unturned in popularizing Yasir’s slang usage. The video posted above fetched over a thousand likes and 255-retweets. Talk about a social media sensation.

As for the current state of the match, Pakistan are batting at 30/1 with opener Shan Masood back in the hut. The visitors are missing a their batting stalwart, Babar Azam, and are looking for a highly spirited performance from their inexperienced batting group.