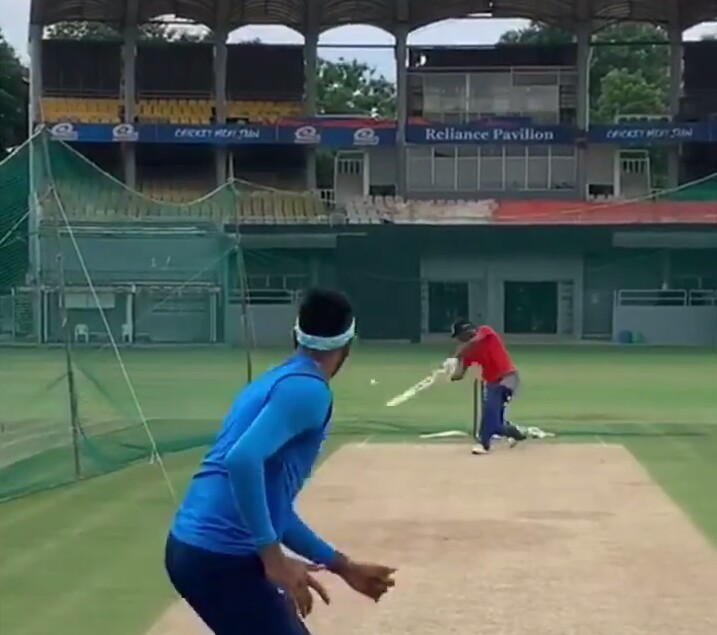 The Indian all-rounder Krunal Pandya had a pretty nice T20 series against West Indies in the United States of America. Meanwhile, he was awarded Man of The Series during the series. And now ahead of South Africa Twenty-Twenty series Krunal has come up with a warning sign video to the rivals. Actually, both Pandya brothers have shared their net practice session videos over social media.

The video of the Pandya Brothers’ practice session has been going viral with a vast speed. Both are trying them to hit hard to get the ball out of the park. The India vs South Africa is commencing on the coming Sunday at Dharmashala. Meanwhile, HPCA stadium Dharmashala is going to host an international match after a long wait.

Meanwhile, in a video uploaded on Twitter Handle, Krunal Pandya has played some impressive shots. He shared the video with the caption, “Getting into the groove.” Here we are sharing the video below.

Here is the video of Elder Pandya’s Practice session

Getting into the groove 👊👀 pic.twitter.com/2gbd35GWro

Earlier, Hardik has also shared a video on the twitter handle of his practice session. During the practice session, he hit the ball in all parts of the ground.  The flamboyant all-rounder played MS Dhoni’s trademark helicopter shot during his time in the nets. He tweeted, “Solid session in the nets today. Can’t wait to join up with the boys.”

Here is the video of the Hardik Pandya net practice session

I think I won that round big bro @krunalpandya24 😂😂

P.S: Sorry for almost knocking your head off 🤣🙏😘 pic.twitter.com/492chd1RZh

Team India T20 series against South Africa is starting form the 15th December in Dharamshala. And after that, the teams will move to Mohali for their next game on 18th September. Then the last T20 game of the series will be scheduled at Bengaluru on 22nd December 2019. Thereafter, India and South Africa have to play 3 matches Test Series starting from 2nd of the October.