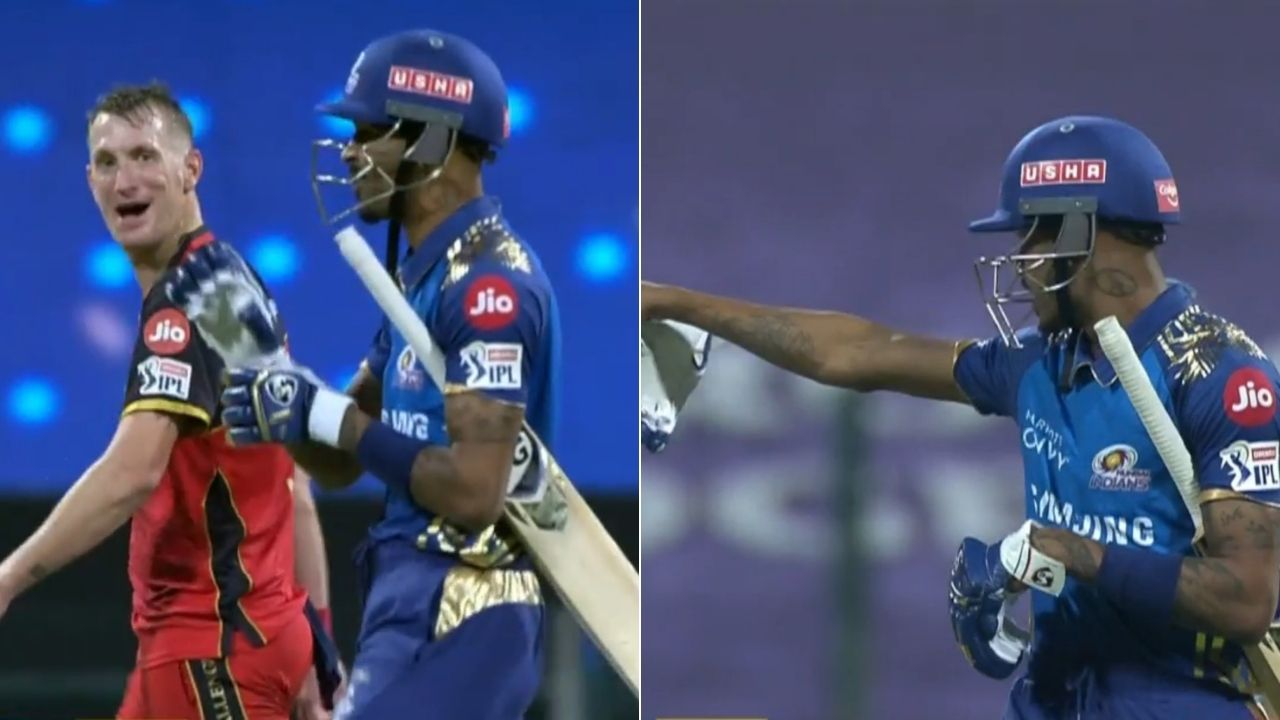 Exactly a month after going down in a close-fought super over, the Mumbai Indians (MI) exacted a sweet revenge over Virat Kohli’s Royal Challengers Bangalore (RCB) as the men in blue emerged victorious in Wednesday’s reverse fixture match at Abu Dhabi. The win takes MI’s points tally to 16 points, virtually guaranteeing them a spot in the playoffs- and possibly the top two. RCB, meanwhile, are holding on to the second spot at 14-points with 2-more encounters left.

As has been a trademark of several Mumbai-Bangalore clashes, this match, too, went down in quite an intense fashion. Suryakumar ‘SKY’ Yadav clobbered Mohammed Siraj for a fine boundary to bring the last-over thriller to an exciting finish. However, even before MI scored the winning runs, there were quite a few tempers flaring around. The penultimate over of Mumbai’s innings saw Hardik Pandya and Chris Morris exchange a few heated words between themselves.

Hardik and Morris have a go at each other

It all started from Morris’ fourth ball of the over; a back-of-the-length ball delivered right into the slot, which the younger Pandya brother powered over long-on for a six. Immediately after the hit, though, Hardik had a few words of advice reserved for his South African opponent. Likewise, Morris too regarded Pandya with an intense stare.

Then in the following delivery, Hardik tried to smack yet another maximum- over extra-cover this time- to level the scores. But on this occasion, Mohammed Siraj grabbed a stunning dive-catch to nullify that ambition. A vindicated Morris proceeded to give Hardik a smiling send-off, prompting a second round of retaliation from the Mumbai batsman. Here’s the video of the incident:

Both players reprimanded for breaching the code of conduct

Interestingly, none of the on-field umpires felt the need to interfere or reprimand either player during the incident. But the organizers did not let the duo walk-off scotch free; on Thursday, both Hardik and Morris were reprimanded by Manu Nayyar, the match referee, for breaching IPL’s code of conduct. Both players admitted to their respective level 1 charges; Morris under offense 2.5, Pandya under offense 2.20.