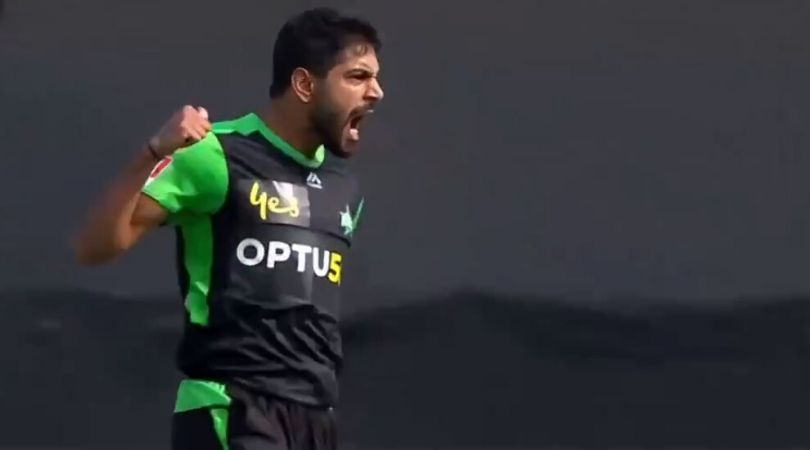 Haris Rauf’s death celebration after taking a wicket in BBL 2019: Big Bash League (BBL) 2019 is at its peak stage and teams are trying hard to win the games in order to get into top 5 positions. Meanwhile, in the 19th match of the ongoing season, Melbourne Stars defeated Sydney Thunders by 3 wickets and added two more points in their bag. One of the main highlights of the match was a death celebration from Pakistani bowler which made headlines.

It all happened in the 18th over of the first innings when Daniel Sam was undone by a speedy delivery from Rauf. The batsman was attempting a big shot, however, lost his wicket as missed to hit the ball with the bat. Thereafter an epic celebration from the bowler came up, although, for the bowler, this brought severe criticism on social media platform Twitter.

The official twitter handle of the Big Bash League has shared the video of the incident. And also wrote in the caption, “This stump cam footage is BRUTAL! #BBL09.” Here we are attaching the video of the same at the below of this article.

SHORT SUMMARY OF THE MATCH

Earlier in the match, after winning the toss Sydney Thunder decided to bat first at Sydney Showground Stadium in Sydney. Meanwhile, batting first, Sydney Thunder managed to score 142-7 at the end of the 20th over. From Sydney Thunder, Alex Ross was the top scorer, who scored 40 runs of 32 balls.

In the reply, Melbourne Stars’ chased down the scorer in the fourth ball of the last over and won the match with 3 wickets remaining. From Melbourne Stars, Nick Larkin scored 65 runs off 45 balls and helped the team to chase comfortably. And hence, later on, he was awarded ‘Player of the Match’ for his good knock.