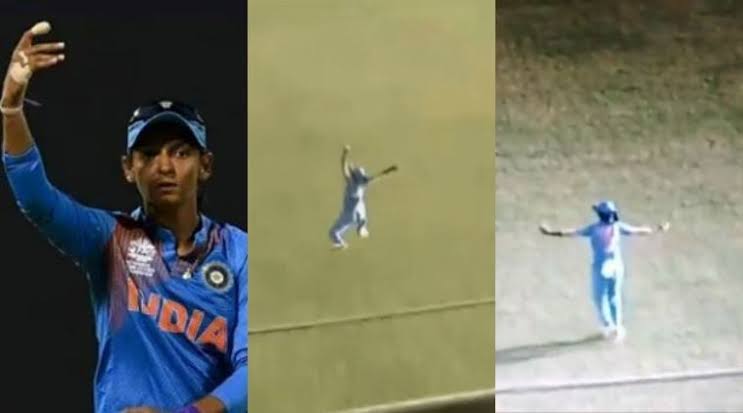 WATCH- Harmanpreet Kaur Takes A One-Handed Stunning Catch: Indian women Cricket Team is currently in West Indies for the three matches ODIs series. In the opening clash of the series, Team India has lost the match with minor margins at the  Sir Vivian Richards Stadium, North Sound, in Antigua. Meanwhile, from India, Priya Punia was the top scorer with a fine knock of 75.

However, the Harmanpreet Kaur failed to score a fine inning. But she took a stunning catch which won the hearts of the fans. Harmanpreet Kaur’s received a lot of praise on social media and soon enough the video went viral on Twitter. Here we are sharing the video of the catch which is looking very stunning one.

Here is the video of the stunning catch

Here u go!!
Penultimate ball SIX and then Harmanpreet Stunner in last ball of the innings !!#WIWvINDW pic.twitter.com/nMoZbDPx1N

WATCH: Rohit Sharma Shuts A Reporter For Interrupting Him In Press

Shot Summary of the match

It was one of the best matches ever had in the history of cricket. Actually, in this match West Indies women have defeated Team India with just a margin of  1 run. Meanwhile, after winning the toss West Indies had chosen bat first at the  Sir Vivian Richards Stadium, North Sound, in Antigua. And with a fine knock from Stafanie Taylor of 94 runs, West Indies team could manage to score 225 runs in 50 overs. In the reply, Team India was looking comfortable in the initial stage of the chase. For the first wicket, Priya Punia and Jemimah Rodrigues scored 78 runs. Thereafter, Jemimah Rodrigues dismissed after scoring 41 off 67 balls. And Priya Punia gives away her wicket after scoring 75 off 107 balls. Then no one could manage to score 25+ from India and Team India lost to West Indies with just a margin of 1 run.