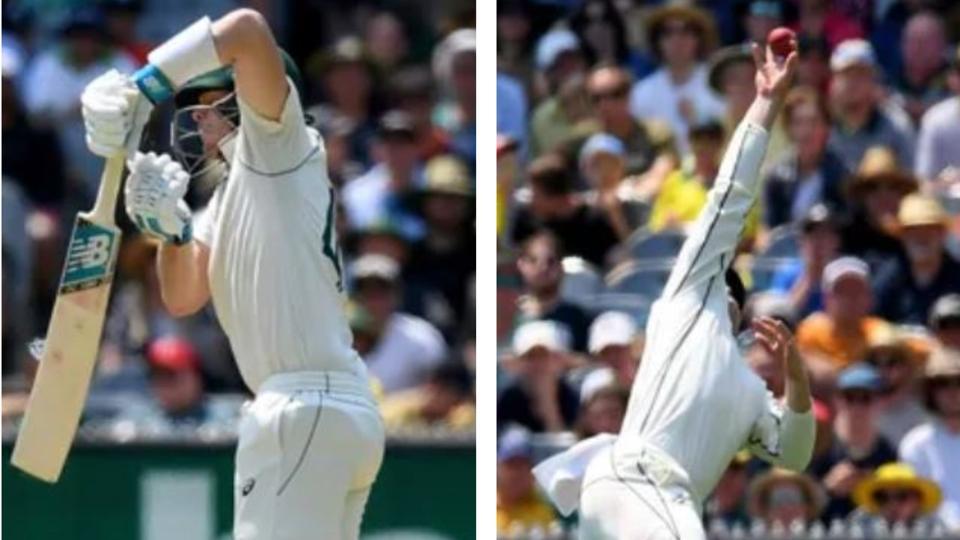 Henry Nicholls Takes A Stunning Fingertips Catch To Dismiss Steve Smith: New Zealand is currently on the Tour of Australia to play three matches Test Series. Meanwhile, in the first match of the series, Australia has beaten up New Zealand by a huge margin of 296 runs. And now both the teams have moved to play the second match at Melbourne Cricket Ground. During the second day of the ongoing Test match, Kiwi’s player Henry Nicholls has taken a stunning fingertips-catch to dismiss Australian batsman Steve Smith.

It all happened in the 105th over of the Australian first innings, when Neil Wagner bowled a shorter delivery to Steve Smith. Smith, on his part, could not do much and could only edge the ball towards the slip while being in an awkward position. However, the ball was still looking land safely before Henry Nicholls grabbed a stunning catch. He took the catch between his fingertips and thumb with his right hand.

The official twitter handle of Cricket Australia has shared the video of the incident. Cricket.com.au posted the video with the caption, ” We have takeoff!  A flying Henry Nicholls takes a screamer in the gully to remove Steve Smith!| #AUSvNZ. ” Here we are attaching the video of the same at the below of this article.

Earlier in the match, after winning the toss, New Zealand decided to bowl first at MCG. Meanwhile, batting first Australian team scored 467 before getting all out, thanks to Travis Head’s 114. Australian captain Tim Paine and batsman Steve Smith also played decent innings of 79 and 85 respectively. From New Zealand, Neil Wagner took 4 and Tim Southee 3 wickets.

So far in the Kiwi’s first innings, they have scored 29-1 at the end of the 9 over. Skipper Kane Williamson is currently batting along with opener Tom Latham for the second wicket.