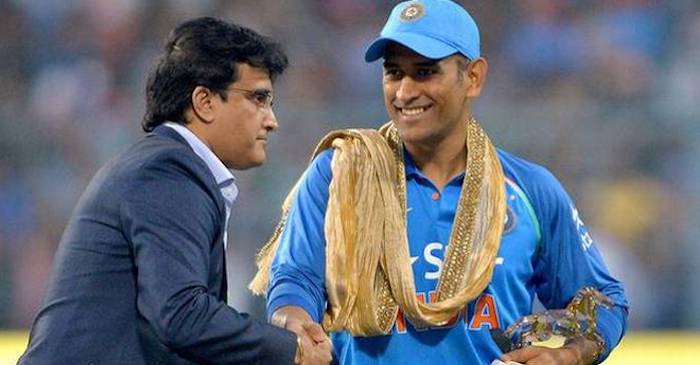 Erstwhile Indian captain Sourav Ganguly frequently gets credited for instilling a ‘winning culture’ in the national team. In his sixteen-year-long stint with the men’s international team; the Bengal-born batsman successfully assembled a powerful arsenal of up and coming match-winners. The likes of Harbhajan Singh, Zaheer Khan, Yuvraj Singh, and Virender Sehwag, among countless others; all thrived under Dada’s watchful eyes and went on to acclaim the status of national sport-icons.

Former India skipper MS Dhoni also happens to be a graduate from the aforementioned metaphorical ‘Sourav Ganguly’s academy of excellence in cricket’. It’s true; Dhoni’s unconventionally calm and collected captaincy style truly accords its niche in the lavish history of Indian cricket. But in the process of demarcating Dhoni’s success, fans often tend to not acknowledge Ganguly’s elder-brother role behind MSD’s success.

Despite a poor, run-out for naught ODI-debut, Ganguly didn’t lose faith in his budding, Ranchi-born, ‘keeper teammate’s abilities. Dada insisted the management to persist with Dhoni, ahead of the more experienced likes of Dinesh Karthik and Parthiv Patel. It took MSD a while to repay his captain’s faith- but once he found his foot in, there was no stopping him. Over the next couple of series, Mahi cracked a sensational couple of centuries against Sri Lanka and Pakistan to establish himself as one of the team’s batting mainstays. With time, the selectors decided to experiment with Dhoni’s on-field astuteness by handing him the captaincy reins. Needless to say, the experiment proved successful; the rest is common history.

“Happy that my instincts about Dhoni were correct”- Sourav Ganguly

“That’s true but that’s my job. Isn’t it? That’s every captain’s job to pick the best and make the best team possible. You go by your instincts, you go by your faith on the player that he will deliver for you. I am happy that Indian cricket got a Mahendra Singh Dhoni because he is unbelievable,” Dada said.

Talking about what made Dhoni such an indispensable asset in any side, here’s what Dada had to say. “One of the great players in the world I would say, not only a great finisher. Everyone talks about his finishing skills, but back when I was leading the team, he played at number three. He’s fantastic. I always believe that he should bat up the order. The best players can find the fence under pressure consistently and MS Dhoni was one of them.”