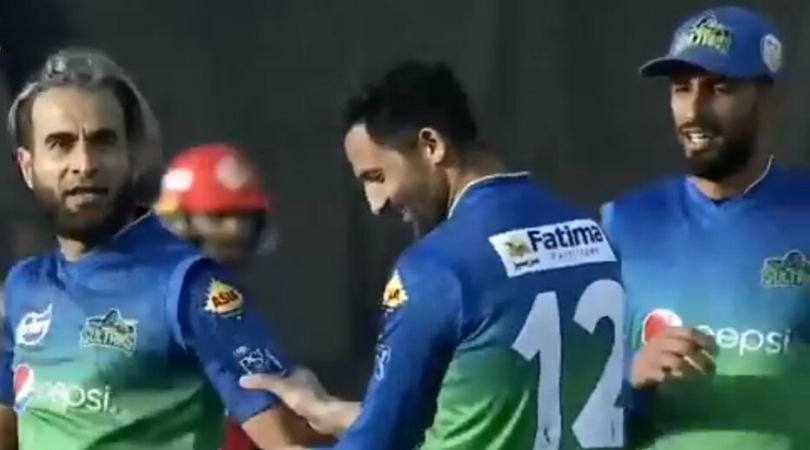 South African spin bowler Imran Tahir is known for his animated celebrations after dismissing the batsmen. His habit of celebrating wicket that sees him run wildly with his arms wide open may annoy the batsmen as he gets aggressive while doing so. And during the 22nd match of the ongoing Pakistan Super League (PSL) the same incident took place when he dismissed Colin Munro.

Actually, things nearly went out of control on Sunday when during the 22nd match between Multan Sultans and Islamabad United, Imran Tahir and Colin Munro involved in some heated exchange of words. It all happened on the 5th over of the first innings when the veteran spinner Imran Tahir celebrated the Munro’s dismissal in his trademark fashion.

While the fans enjoy the Tahir’s celebration, Colin Munro didn’t like the celebration and made it pretty clear. As he was involved in some heated exchange words with the Multan Sultans’ spin bowler. This all not stopped here at all, but thereafter when Imran dismissed Shadab Khan in the 7th over he gets aggressive. Tahir gives an aggressive send-off to Islamabad’s batsman Shadab Khan.

Later after the match, Colin Munro opened up on the incident and stated that he called Imran Tahir a clown for his celebration. “I am tired of seeing him (Imran Tahir) celebrate like that and I called him a clown and he took it the wrong way and then you saw what he said to me, so we will leave it at that, eh?” said Munro.

Earlier the game was reduced to 9 overs each side due to the rain. Meanwhile, Multan Sultan after winning the toss opted to ball first at Rawalpindi Cricket Stadium in Rawalpindi. In the first innings, Islamabad United managed to score 91-7 at the end of the 9 overs. From Islamabad, Colin Munro was the top scorer who scored 25 runs off 12 balls.

In the reply, Multan Sultan’s comfortably chased down the score inside 7 overs. James Vince played a beautiful unbeaten knock of 61 off just 24 balls and helped the team to chase the target. Later, he was awarded the ‘Player of the Match’ for his brilliant innings.

IMRAN TAHIR IS RUNNING TOWARDS ISLAMABAD. RAWALPINDI IS ON ITS FEET 💥