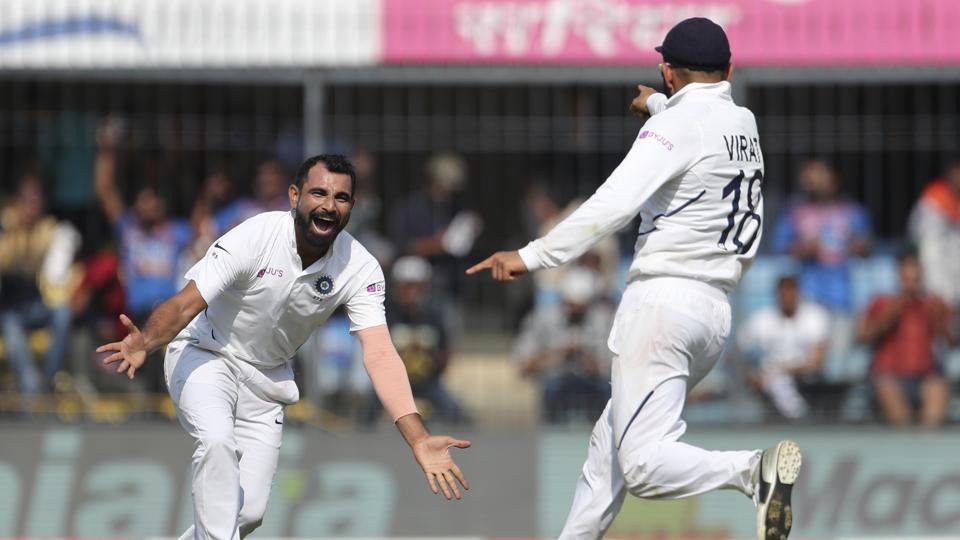 WATCH- Ind vs Ban: Virat Tells The Crowd Cheer For Shami Not For Him: After winning the T20 series against Bangladesh now Team India has moved to Indore to play the first match of the two matches Test series. On Thursday morning, the match was started with Bangladesh winning the toss and they had opted to bat first. Meanwhile, their batting unit completely thrashed by Indian bowling line up.

Indian pacer Mohammad Shami took three wickets for 27 runs. Ishant Sharma and Umesh Yadav both had taken 2-2 wickets each by giving 20 and 47 runs respectively. While off-spinner R Ashwin claimed two scalps as India bundled out the visitors for a paltry 150. However, Team fielders had missed plenty of chances by dropping some simple catches. Despite that Bangladesh couldn’t manage to score well in the first innings.

Team India captain Virat Kohli, who was making his comeback after being rested for the T20 series, was full of energy as he kept encouraging his bowlers. In fact, during an over of Mohammad Shami, Virat involved the crowd to cheer the bowler. It was the best moment of the first day of the match, actually, while Shami was bowling, the crowd were cheering for Virat Kohli. As soon as Virat got this, he requested to the crowd cheer for Mohammad Shami, not for him.

Here we are sharing the video of the incident. Probably, it is the best moment so far in the match. While Kohli was requesting the crowd to cheer for Shami, Shami gets the wicket in the very next ball of Mushfiqur Rahim. In this over, he gets two back to back wickets before the game called off for the tea.

Here is the video (Ind vs Ban: Virat Tells The Crowd Cheer For Shami Not For Him)

LOL Kohli telling the crowd to cheer for Shami, not for him and Shami gets a wicket the next ball! 😂👌🏽 pic.twitter.com/Cp8L731Ie7

Earlier in the match, Bangladesh after winning the toss decided to bat first at Holkar Cricket Stadium in Indore. Meanwhile, they have scored 150 runs in the first innings, Mushfiqur Rahim was the only batsman from Bangladesh who manages to score 40+. In the reply, Team India has scored 86-1 before the game called off for the first day at Indore.