Kishan's cheeky act of trolling Balbirine backfires as the batter returns back into the crease after umpire signals a no-ball. 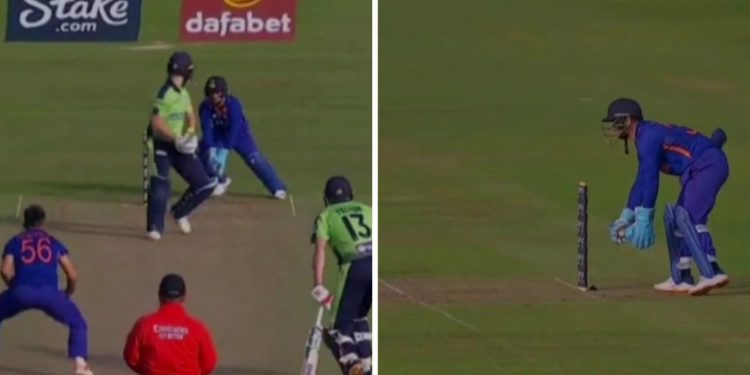 The Hardik Pandya-led team India managed to contain the Ireland batters in the second T20I and won the series 2-0 on Tuesday. Previously, in the first T20, the men in blue registered an easy win against the Irish and took an unassailable 1-0 lead. However, in the 2nd game, the hosts put up a great fight with their batting and came quite close to chasing the score. While the chase was on, Ireland opener Andrew Balbirnie and Ishan Kishan shared a funny moment that turned out to be embarrassing for the Indian wicket-keeper.

Ravi Bishnoi who was bowling the 8th over bowled a googly and Balbirnie came down the pitch to smash the ball towards the boundary. However, the ball remained low and the batter failed to connect. Meanwhile, Ishan Kishan did well to collect the ball behind the stumps and performed a stumping. Interestingly, Kishan did a cheeky act while stumping Balbirnie. He performed a slow stumping as if he was asking Balbirnie to try and return back into the crease. However, Balbirnie after looking back realized that he was too short of the crease and didn’t attempt to return back in, instead started walking back to the dugout.

Indians, after getting Balbirnie out, who was looking in great touch, had started celebrating. The celebrations however didn’t last long as the umpire signaled a no-ball. It was clearly seen in the replay that Ravi Bishnoi had overstepped. The decision was hence overturned and Balbirnie returned back to the pitch. The cheeky act of Ishan Kishan, therefore, turned out to be embarrassing for the keeper himself. Balbirnie was even seen having a word with Kishan after returning to the crease.

Here’s the video of the incident:

Umran manages to defend 12 off 4 in the last over

After some brutal hitting by the Ireland batters, things came down to the last over in the 2nd IRE vs IND T20I. Umran had to defend 17 against Dockrell and Adair, the two batters on the crease. He started off with a dot but overstepped in the next ball and conceded two fours in the next two deliveries. Ireland then needed 8 off 3 but Umran did well to give just two runs in the next two balls. Needing 6 off the last ball, Adair did swing his bat but couldn’t give much air to the ball as it was stopped in the deep.