In the process of hitting the ball, Bumrah lost his balance and his leg hit the stumps. 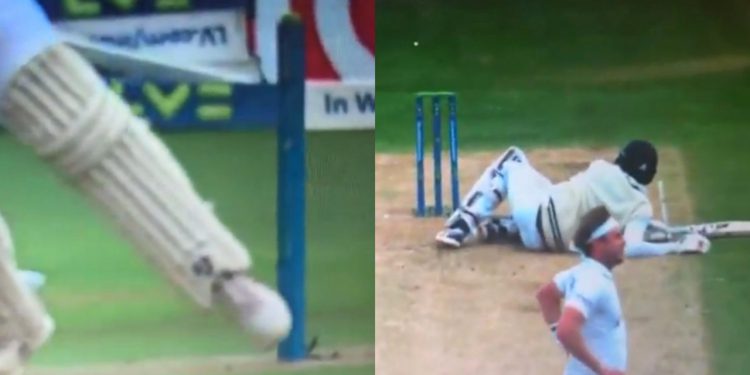 The ongoing fifth test match between England and India can be deemed historic for a number of reasons. For one thing, it’s not often that you get to see two countries playing a rescheduled match within the span of one year. Then there’s the fact that this India team is being captained by Jasprit Bumrah, India’s first-ever specialist fast-bowling captain- if you could call him that anymore.

Over at the toss on Friday, Bumrah had corrected correspondent Mark Butcher, reminding that Kapil Dev was the first fast-bowler to have led India in test matches. Butcher replied that Kapil was an all-rounder rather than a specialist bowler; which Bumrah had acknowledged with a wry smile at the time.

But little did the cricketing fraternity know that Bumrah had all kinds of different ideas planned in his mind to shed off his tag of specialist fast-bowler. On the second day of play, Bumrah scripted his name in the history books of cricket as he collected 35-runs of Stuart Broad’s over; the most till date in the history of test-cricket.

In pretty much a reenactment of Yuvraj Singh’s 6-sixes against the same bowler from almost 15 years ago, Bumrah batted with sheer ruthlessness, and looked to smash every delivery out of the park. He was, in part, helped by the poor quality of bowling that Broad dished out; but it was Bumrah’s hyper-aggressive mindset at the forefront that allowed himself to register such a historical feat in test cricket.

Bumrah survives getting out hit-wicket

Some would say that argue that Bumrah got perhaps a bit too reckless in going after Broad, and they would be right. In the fourth delivery of Broad’s over, Bumrah played a massive pull shot over square leg to collect a four. But in the process of hitting the ball, Bumrah lost his balance, and his left foot grazed past the leg stump. It was sheer luck that saved him from being dismissed hit-wicket, as the bails stayed on and the India stand-in captain went on to register his name in the golden pages of cricket. Here’s the video of the incident:

ALSO WATCH: Jasprit Bumrah smashes Stuart Broad for 35 runs in an over