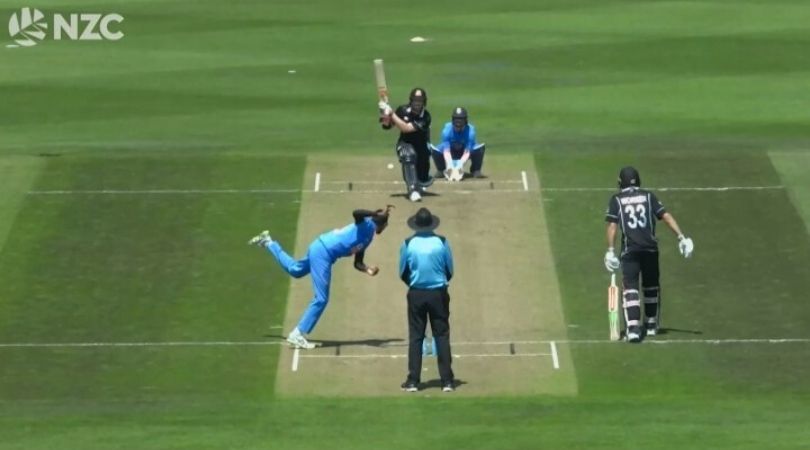 As the Kiwis are facing India in five-match Twenty20 International series, their A teams are also playing each other. However, the senior teams will play three-match One Day International series and two Tests following the shortest format of the game. Amidst all these, New Zealand all-rounder Jimmy Neesham faced a nasty incident.

Jimmy Neesham has been dropped from the senior team and currently featured in the New Zealand A team. While playing for them against India A, the Kiwi player got retired hurt after hurting himself while trying to hit a reverse sweep shot during the match recently.

The hit was so hard that it forced him to leave the crease and undergo a head assessment before returning to the crease again. Jimmy Neesham immediately shared how dangerously he got hurt by the bowler.

He took to Twitter and shared his picture with an interesting caption which read, “Got fixed up good today! Lesson: don’t reverse sweep up into your own face.” The cut on his jawline looked deep as his fans showered concern and some also made funny jokes about the blunder as well.

Got fixed up good today! Lesson: don’t reverse sweep up into your own face 😂😂😂 pic.twitter.com/0zTVFw8NLD

After his tweet, Neesham was flooded with responses which include former New Zealand captain Brendon McCullum. He also commented on Neesham’s post.

Here is how Jimmy Neesham gets hurt

Meanwhile, New Zealand A won against the India A team, even though the national team failed to win the game in the first T20I match. None of the India A batsmen could impress in the game as it was an easy win for the hosts. The top order of the India A team crumbled under pressure very soon and failed to provide stability to their innings. Only Krunal Pandya made some effort with a half-century but all of it went in vain as they lost the game.

There are doubts over his playing in the next match which is on Sunday. However, with this win, the series ended up in a draw as New Zealand levelled the series’ with their convincing victory whereas Indian team won the first game played at the Oval.