Both the rivals from the past shows mutual respect after MI vs PBKS match. 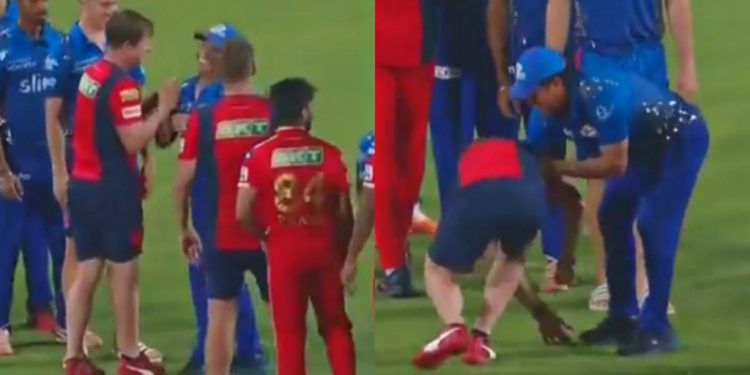 It has been a season to forget for the 5-time champion Mumbai Indians. Nothing has worked for the Rohit Sharma-led side this season. It seems team management has failed to build a balanced squad in the auctions as the bowling of the side is looking weak. In their latest outing against Punjab Kings, Mumbai Indians suffered the 5th consecutive defeat.

Even the efforts of the greatest players in Mumbai Indians’ dugout have not paid off. Coach Mahela Jayawardene and Sachin Tendulkar were seen rushing to the ground during the drinks break in the last match to share valuable advice to young players. Although, Dewald Brevis going berserk against Rahul Chahar and Suryakaumar Yadav keeping his good form alive were some of the positives for MI.

However, after the game, we witnessed a scene that will definitely put a grin on upset Mumbai fans’ faces. Punjab Kings fielding coach Jonty Rhodes earned netizens’ respect by bowing down in front of Master Blaster and trying to touch his feet. Sachin might have felt a bit embarrassed as he tried to stop him from doing so.

He lifted the South African up and gave him a hug which shows the mutual respect between the two rivals from the past. Interestingly, Rhodes is 4-year elder than Sachin. Here below is the video of the incident.

i missed this last night why is he like this? pic.twitter.com/AnlnoyZgOp

A few know that Sachin and Rhodes share an interesting fact which is being involved in the first-ever third Umpire decision. In a South Africa vs India Test at Durban, Sachin was dismissed run-out by the legendary fielder and it was the first time in cricket history when the third umpire’s role came into play.

Talking about Mumbai Indians and Punjab Kings’ season so far, the standings of both teams at the table are no.10 and no.4 respectively. From here, Rohit Sharma and co. can’t afford another loss, on the other hand, Mayank Agarwal-led side is going well with 3 wins in 5 outings. It will be interesting to see if MI qualifies for the play-offs or not.