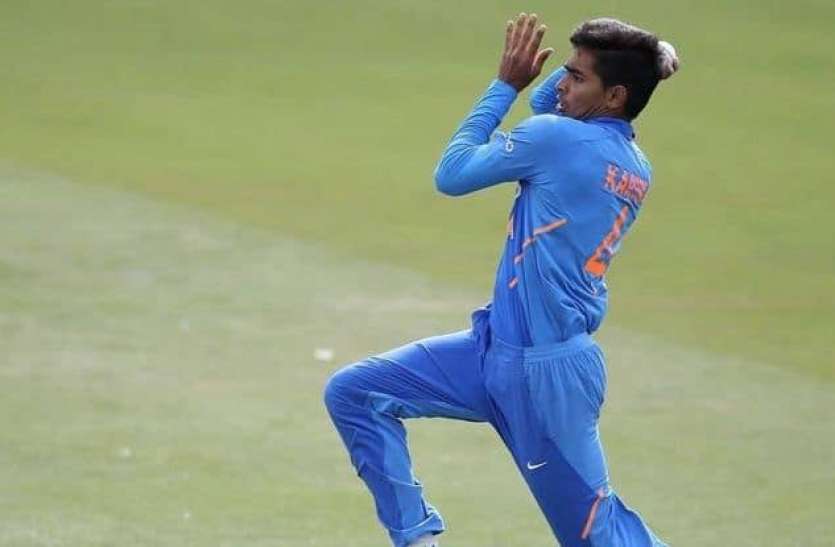 Kartik Tyagi Castles Irfan Khan With Stunning Yorker In The World Cup Semi-Final: On Tuesday, India Under 19 team has beaten up Pakistan Under 19 team in the first semi-final of the ongoing ICC Under 19 World Cup 2020. The Indian team has made a one-sided win to reach in the World Cup Finals as they have castles the victory with 10 wickets remaining. Meanwhile, Indian pacer Kartik Tyagi took Irfan Khan with a stunning yorker.

It all happened in the 37th over of the Pakistan innings when the Pak team were in the pressure as they had already lost the 5 wickets and Irfan Khan was about to face the second delivery of the over. Indian pacer Kartik bowled a beautiful unplayable yorker at the base of the off stump to dismiss the batsman.

Earlier in the match, after winning the toss Pakistan under 19 teams decided to bat first at Senwes Park in Potchefstroom. Meanwhile, in the first innings, Pakistan team could manage to score only 172 before getting all out inside 44 overs. From the Pak team, Rohail Nazir was the top scorer, who scored 62 off 102 balls. No other batsman looked comfortable in front of the Indian bowling unit.

In the reply, team India chased down the score in the 36th over with remaining 10 wickets. Indian openers Yashavi Jaiswal and Divyansh Saxena completely vanished the Pakistan bowling department. Yashavi scored unbeaten 105 off 113 balls and Saxena scored 59 off 99 balls. Yashavi Jaiswal awarded with the Player of the Match for his knock in the world cup semi-final.

“It is a dream come true for me. Really happy with what I did for my country, I can’t express it in words. I’ll never forget that I scored a hundred in the World Cup against Pakistan. It is just the start though, I have to work really hard in the future as well. We (Saxena and me) were talking amongst ourselves that we needed to stay on the wicket. They bowled well initially and we had to see it out. All of us, our support staff, physio, manager, they put in the effort and I want to thank all the Indians who prayed for us. We will try our best in the finals”, Yashavi Jaiswal said in the post-match presentation.