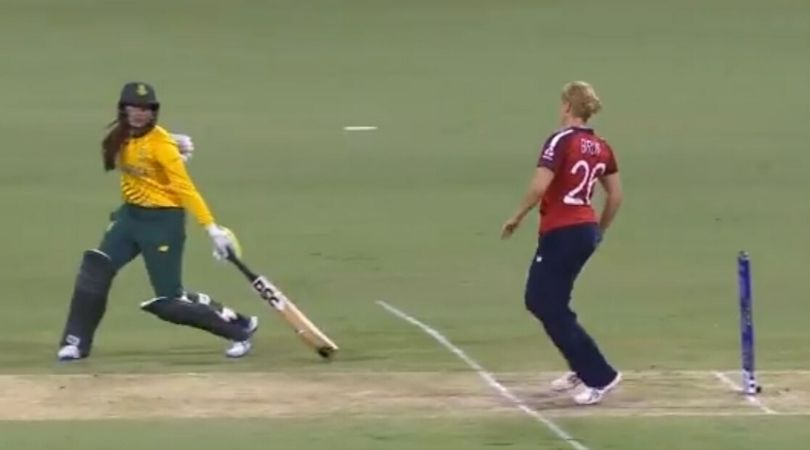 On 21st February 2020, the ICC T20 World Cup 2020 locked its horn with the opening match between India women and Australia women. Meanwhile, during the fourth match of the tournament between England women and South African women, an incident took place which brought storm on social media platforms. Actually, English bowler Katherine Brunt choose not to Mankad the batter Sune Luss in the critical stage of the match.

It all happened on the third delivery of the last over when South Africa required seven runs off four balls to win the match. And while Katherine was about to deliver the third ball of the over she had an opportunity to dismiss the South African batter at the non-striker’s end, however, she chooses not to Mankad because of the ‘Spirit of the Game’.

South Africa batswoman Mignon du Preez, who was on the striker’s end, hit a six and a four on the following two deliveries to seal a 124-run chase against a dominant English side. Had Brunt dismissed Luus via Mankad, it might just have affected du Preez’s mindset before playing a big shot. The video of the incident is making rounds on the internet. Here we are also attaching the same at the below of this article.

The official twitter handle of the ICC has shared the video of the incident. International Cricket Council has also asked a question from the fans about the incident. ICC wrote in the caption, “With the game on the line, Katherine Brunt could have dismissed Sune Luus at the non-striker’s end, but opted not to. Moments later Mignon du Preez blasted a game-defining six. What do you think?”

With the game on the line, Katherine Brunt could have dismissed Sune Luus at the non-striker's end, but opted not to. Moments later Mignon du Preez blasted a game-defining six.

What do you think? 🤔 pic.twitter.com/oPqeUdo7Hl

Earlier in the match, after winning the toss South Africa opted to ball first at W.A.C.A. Ground in Perth. Meanwhile, the English Team could manage to score only 123-8 at the end of the 20 overs. In the reply, South Africa women chased down the score in the 20th over with remaining 2 balls. And hence won the match by 6 wickets.