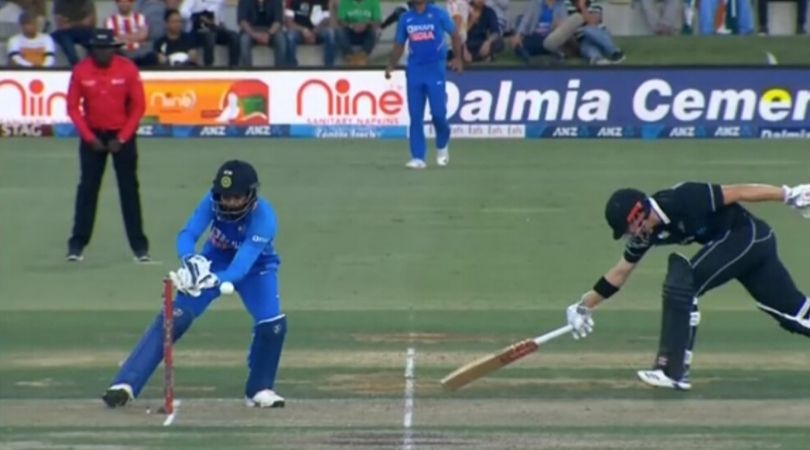 A third, successive ODI defeat handed the Indian team their first 3-match ODI series whitewash since 2007. Kiwi opener Henry Nicholls led the charge for his side, scoring a match-winning knock of 80-runs. In retrospect, things could’ve ended differently for India, if wicket-keeper KL Rahul hadn’t missed the golden opportunity to run Nicholls out.

The incident in question happened during the 12th over of New Zealand’s innings. Left-arm spinner Ravindra Jadeja was bowling the fourth-delivery of his over. On-strike Martin Guptill flicked the fullish-delivery to the off-side, and dashed to steal a quick single. His partner Nicholls reacted fast to the call, and began his own stride to the other end.

That’s when India’s fielder at point, Manish Pandey, came up with a brilliant piece of fielding. He made a quick-run to collect the ball, and wasted no-time throwing it back right at ‘keeper KL Rahul’s hands. Rahul, unfortunately, couldn’t be as skillful with his efforts. A fumble with the ball caused it to drop, and he ended up knocking over the stumps with his gloves. Here’s the video of the missed run-out chance:

The in-form Nicholls received a clinical reprieve while batting at 23-runs. He went on score his 11th ODI fifty, and finished at 80-runs off 103 -balls, collecting 9-boundaries in the process. Guptill (66 off 46) and Nicholls set up a strong-foundation for the hosts 297-run target chase. However, it was all-rounder Colin de Grandhomme who finished off the chase with his power-packed batting. The Zimbabwe-born remained unbeaten on 58 off 28 balls, in a knock that included 6-fours and 3-sixes. Alongside ‘keeper Tom Latham  (32 off 34), the duo stitched a sublime 6th wicket partnership of 80-runs to win the match here at Mount Maunganui.

Earlier, returning New Zealand captain had won the toss and asked the tourists to bat first. Young opener Prithvi Shaw sizzled with an impressive knock of 40-runs at the top. Yet, for the umpteenth time on this tour, it was the Indian middle order who put up their hands for the job. Glovesman Rahul top-scored with his fourth ODI hundred (112 off 113), while Shreyas Iyer and Manish Pandey ably played support roles. Pacer Hamish Bennett turned out to be the hosts’ bowler of the day, with figures of 10-1-64-4. The end of the limited-over series now shifts the action to the longest format with a 2-match test series. The first test starts from 21 February at Wellington’s Basin Reserve Stadium.