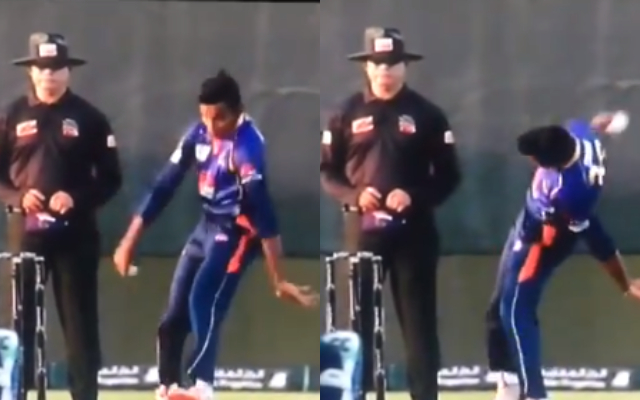 A bowler’s performance relies a lot on his action. Of course, there’s the point of legality that determines if at all a bowler should be allowed to operate as a bowler. But even the regulations aside, a bowler’s delivery action governs some of the most important skill-sets of their game.

The likes of Sohail Tanvir, Paul Adams and, more recently, Jasprit Bumrah, owe a lot of their success to their unorthodox bowling actions. After all, a relatively unexpected action can affect a batsman’s ability to read the delivery and score runs.

Well, some actions can just be a bit too much bamboozling, and Sri Lankan spinner Kevin Koththiigoda seems to be someone to fit that  niche. Kevin recently made his debut in a T10 match in Abu-Dhabi for the Bangla Tigers against the Deccan Gladiators.

However his unusual ‘arch-arm’ action grabbed a lot more attention than the ongoing tournament itself. The 21-year old came in to bowl the fifth over of the innings and managed to startle a good number of viewers. Before releasing the ball, Kevin bends his head a bit too low and stretches his left arm back. The action gives his body the appearance of an awkwardly-bent arch! Check this video out to see for yourself:

While he is still in line to make his international debut, Kevin has already broke into his domestic state team of Galle CC. He has played 5 list A and 6 white ball games so far and already picked up 14 wickets. The T10 outing however wasn’t too memorable for Kevin, as he ended with unimpressive figures of 2-0-22-0. His team, Bangla Tigers, eventually lost the game by 6 wickets, despite good  performances from Rilee Rossouw and Colin Ingram. For the Gladiators, experienced all-rounder Shane Watson starred, scoring 41 off 25 balls.