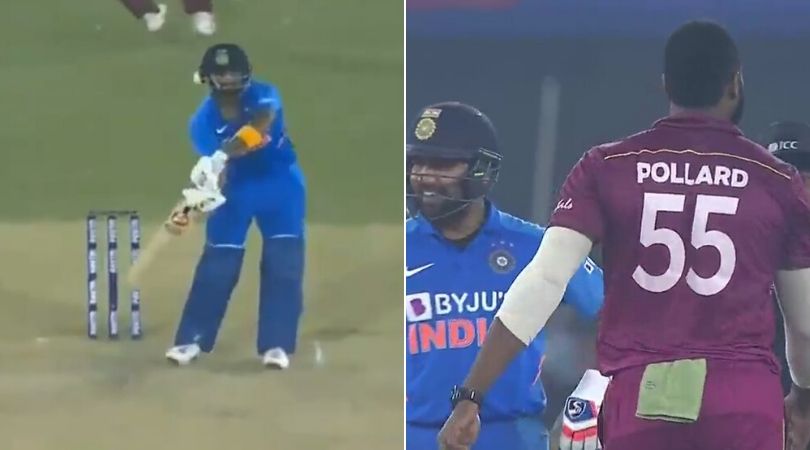 WATCH- KL Rahul Pulls Out Ball, Umpire Signals It Controversial Dead-Ball: On Sunday, Team India won the ODIs series after defeating West Indies in the third and final match in Cuttack. In the third match of the series, Indian team chased down a target of 316. Meanwhile, Virat Kohli scored a beautiful knock of 85 off 81 balls. And Indian opener KL Rahul also scored a decent inning of 77 off 89 balls.

However, KL Rahul is not in the news for good knock only but he is also in the headlines for a controversial dead-ball in between the match. It all happened in the ninth over of the Indian batting when Rahul decided to not offer a shot although after being in a position to play the ball. Actually, when the bowler had delivered the ball, KL feels some sort of disturbance. And hence he signalled towards the square leg region to stop.

While umpire Nitin Menon deemed the ball as a dead ball, West Indies skipper Kieron Pollard seems not to be happy with the decision. And thereafter, Pollard was seen discussing the matter with the umpire. However, it couldn’t affect the umpire’s decision. Here we are sharing the video of the incident at the end of this article.

Earlier in the match, after winning the toss Team India invited the visitor’s team to bat first in the final match of the series in Cuttack. Meanwhile, West Indies has scored 315-5 at the end of the 50th over and set a target of 316 in front of the hosts. From West Indies, Nicholas Puran and skipper Kieron Pollard played good innings in the series decider. They both have scored 89 off 64 and 74 off 51 balls respectively.

In the reply, the Indian team chased down the score in the fourth ball of the 49th over. From India skipper Virat Kohli and the opener, Kl Rahul helped India to chase down the score. They both have scored 85 off 81 and 75 off 89 balls respectively. Captain Kohli awarded with man of the match for his brilliant innings.