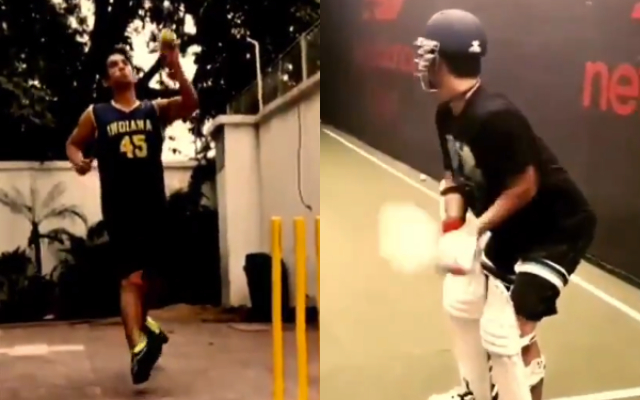 Bollywood-buffs all across the country are still reeling from the tragic demise of actor Sushant Singh Rajput. The multi-faceted 34-year-old filmstar dealt a devastating blow to his fanbase as he committed suicide by hanging in his Bandra apartment on last Sunday.

One aspect of the late Bollywood actor, that has resonated strongly among cricket fans. was the strong connection he had with the gentleman’s game. Sushant’s moving on-screen portrayal of former Indian skipper Mahendra Singh Dhoni is an obvious testament to this claim.  But even outside of that, the Patna-born actor had a strong passion for the sport; evidenced clearly by the many stadium appearances he made in various IPL and international cricket matches.

In fact, a couple of days after the news of Sushant’s death, his fans started to trend a video of Sushant playing cricket on social media. What’s particularly interesting about the video, is that Sushant- by nature a right-handed player; shifted out of his comfort zone and tried out both batting and bowling left-handed. Sushant had posted this video on his Twitter last October, with the caption “Live Soon.:)???????? —— Dream 3/50 ——Play a Cricket match left-handed. ????”. Retrospectively, it’s really tragic to see the departed man openly share some of the things off his bucket list.

Akin to his many of his Bollywood fans, several Indian cricketers too have expressed their grief over Sushant’s passing. Over on a recent chat with the Hindustan Times, fast-bowler Mohammed Shami conveyed frustration of being unable to help his late ‘friend’ Sushant.

“Depression is a problem that needs attention. It was unfortunate to see such a brilliant actor like Sushant lose his life. He was a friend and I wish I could talk to him had I known about his mental condition,” Shami said. Other cricketers like Virat Kohli, Sachin Tendulkar, and Virender Sehwag too conveyed their condolences over on their social feeds. CSK batsman Suresh Raina even reminisced on the good times the two had spent back during the Dhoni movie’s shooting-process.

“Shocked to hear about Sushant Singh Rajput. Met him several times as he spent time with us for Mahi’s biopic. We’ve lost a handsome, ever-smiling actor. Om Shanti!” he tweeted.