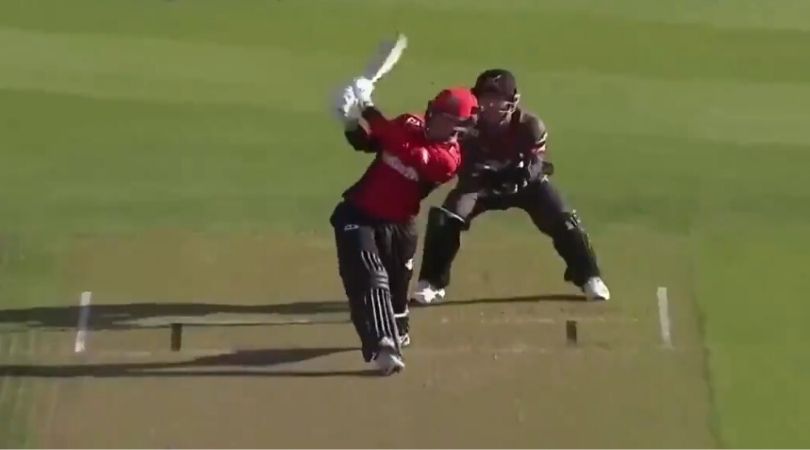 WATCH- Leo Carter hits six sixes off an over in Super Smash League 2019: New Zealand Super Smash League is currently at its apex stage. Meanwhile, teams are trying hard to win the games in order to remain at the top 3 positions for the final league stage.

During the 22nd match of the ongoing season, Canterbury batsman Leo Carter hit six sixes in an over to enter the elite list of batsmen to have achieved the milestone. It was one of the best highlights so far of Super Smash League 2019-20. This match was played between Northern Nights and Canterbury in Christchurch.

It all happened in the 16th over of the second innings when the left-handed Carter took on the left-arm spin of Devcich. Irrespective of the bowler bowling at which line and length he hit the sixes in every direction of the ground.

Short Summary of the Match ( Northern Nights vs Canterbury)

Earlier in the match, after winning the toss Northern Nights decided to bat first at Hagley Oval in Christchurch. Meanwhile, batting first Northerns Nights scored 219-7 at the end of the 20th over. From The Nights’ team, Tim Seifert was the top scorer, who scored 74 off just 36 balls and helped the team to set a target of 2020 in front of the hosts.

In the reply, Canterbury chased down the scorer in the 19th over, thanks to Leo Carter destructive innings. Along with Carter skipper, Cole McConchie also played an unbeaten inning of 49 off 25 balls. Both have added 118 runs for the fourth wicket and helped the team to chase down the scorer comfortably.