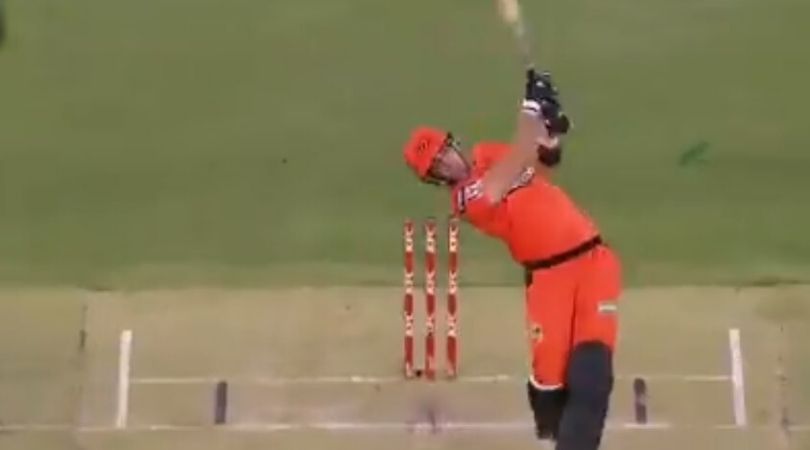 The ongoing edition of the Australian Big-Bash League has, by now, witnessed just about every fascinating aspect of cricket. And just in-case the fans’ demands for mammoth-sixes wasn’t taken care of, Perth’s Liam Livingstone took care of that predicament.

On Friday’s match between the Perth Scorchers and the Adelaide Strikers, Livingstone collected a gargantuan-six off fast-bowler Michael Neser’s bowling.  Neser had come in to bowl the second over of the Scorchers’ innings, and had managed to keep the Perth openers quiet for the first-half of his over. His fourth delivery, however, landed straight in Livingstone’s strong-zone. What followed, was a sheer exhibition of batting-brilliance from the Scorchers’ English opener.

Livingstone charged down the pitch, making enough room for himself, and lofted the ball straight into the night sky. It traveled a surreal 106-meters before coming to a landing, fetching Livingstone an unbelievable 106-meter six! Check out the video of the insane shot:

Livingstone followed that six with half-a-dozen more maximums and a boundary in his gritty 79-run innings. Unfortunately, the lack of support from any batsman on the other-end didn’t help Livingstone and his team’s cause. The Scorchers finished at 165-7, 16-runs short of their target. Wes Agar was the pick of the Strikers’ bowlers, with figures of 4-0-36-3. Earlier in the game, the Strikers had put on 181-runs on the board, thanks to opener Phil Salt’s 59 off 31 balls. With this win, Adelaide have now won 8-matches in the tournament. They are second on the points table and have already booked their spot in the playoffs. Scorchers, meanwhile, are fourth on the table, and will also require other results to go in their favor to keep their play-offs chances alive.