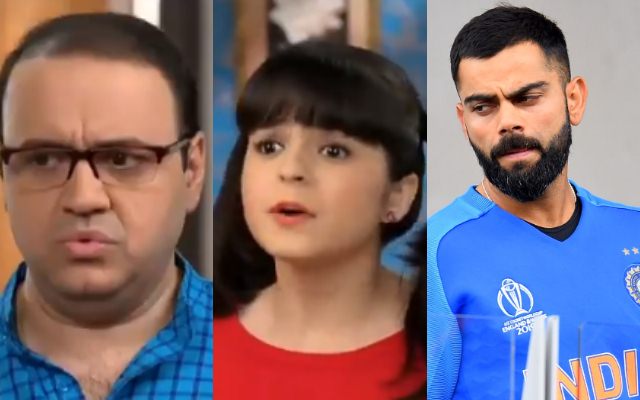 The Indian cricket defeat in the ICC World 2019 semi-finals against New Zealand has come as a huge shock for the fans. However, it is three months ago’s incident but still has an impact on Indian cricket fans. As during Team India were favourites to lift the World Cup 2019 title and also dominates all teams in the first round. But despite that India couldn’t face the pressure in the knockout game and lose the semi-finals match.

Actually, during the semi-finals game, Team India’s batting line-up has collapsed. And from India, only Jadeja and Dhoni played good innings but couldn’t make it to the end. India skipper Virat Kohli who is known for his pressure handling capacity, even he had scored only 1 run. And now Indian skipper Virat Kohli has trolled by the makers of popular sitcom ‘Tarak Mehta Ka Oolta Chashma”.

Meanwhile, during an episode, the characters were supposed to solve a riddle. The riddle had the condition like, “Hmesha Jeetne Wala” which means the one who always wins. And one of the people in the show guessed that Virat Kohli as the answer. And then other person replied that he couldn’t be the Virat as he has faced recently defeat in world cup 2019.

Here we are sharing the video of the incident. Watch the full video here

looks like master bhide is a dhoni fan. pic.twitter.com/Zzfb7eOMfY