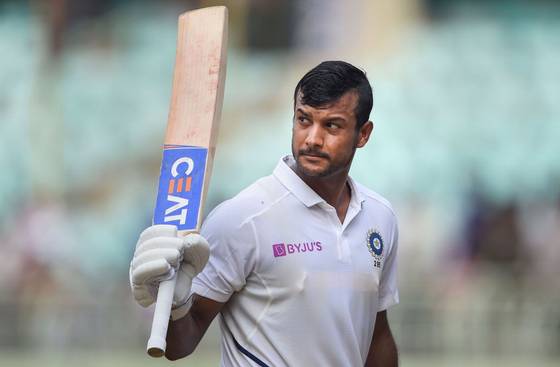 On Friday, Mayank Agarwal socred career-best and second double hundred as India buried the visitors during the first test. Meanwhile, Bangladesh had scored only 150 runs in the first innings. And in the reply, Team India scored 493-7 before declaring at the end of the second day, thanks to Agarwal’s 243 runs.

In the post-match presentation, Mayank Agarwal faced the questions from the reporters and answered very beautifully. During the press conference, one of the reporters asked Mayank about his routine in the hotel after playing a fine inning. He answered the question in a hilarious way and which remained everyone laugh in the press-conference hall.

Here we are sharing the video of the incident. Reporter Asked from Agarwal, “After a day like this, what do you do in the evenings in the hotel? Do you go watch highlights of your innings? Or do you like watching a movie? Or a Netflix show? What do you do? What does Mayank do?”

After this Mayank replied in a hilarious way, ” Mayank Plays PUBG”. And hence everyone starts laughing after listening to the answer from Agarwal.

After a day like this, what does Mayank do…? 😂 #INDvBAN pic.twitter.com/gnAtXzmtTp

Earlier in the match, Bangladesh after winning the toss decided to bat first at Holkar Cricket Stadium in Indore. Meanwhile, they have scored 150 runs in the first innings, Mushfiqur Rahim was the only batsman from Bangladesh who manages to score 40+. In the reply, Team India scored 493-7 before declaring at the end of the second day of the test match. And once again Bangladesh is facing problems in the second innings as India needs only 3 wickets now to win the match. Bangladesh needs to score 140 runs more to level the score of Indian first innings. It is looking again a one-sided win for the Indian team.