Team India’s pacer Mohammed Siraj stopped himself from bowling as Rilee Rossouw went too back into the crease and broke stumps. 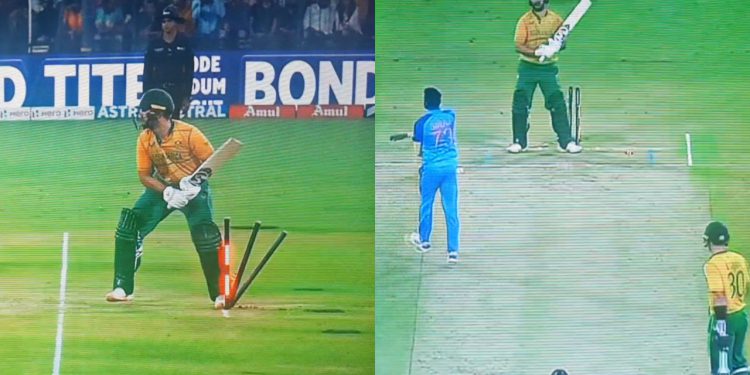 Team India’s pacer Mohammed Siraj stopped himself from bowling as Rilee Rossouw went too back into the crease and broke stumps.

Mohammed Siraj was steaming into his run-up during the 17th over of South Africa’s innings and couldn’t complete the delivery as he saw bails getting knocked off by the batter.

This delivery was a free delivery as Siraj had bowled a full toss above the waist height to Tristan Stubbs which he sliced straight to a deep backward point and was caught by Umesh Yadav.

The on-field umpire ruled it as a no ball and Rossouw got a chance to play the free delivery by Mohammed Siraj.

The left-hand batter pushed himself way back into the crease possibly looking for a slog down the ground.

As Siraj was in his run-up Rilee Rossouw moved even more backward eventually breaking off the stumps.

Mohammed Siraj noticed the lightened bails and stopped himself in the run-up and hurled the ball to wicketkeeper Rishabh Pant. He looked frustrated as he did so.

Rilee Rossouw couldn’t be given out Hit-wicket as the delivery was free delivery and the only way of dismissing a batter on a free delivery is to run him out.

Commentators were of the view that Siraj should have actually bowled the delivery despite the stumps getting broken as it would’ve allowed him to get rid of the free delivery without conceding any run.

Siraj then bowled a full and wide off delivery to prevent a boundary and gave away just 2 runs off the free delivery.

Rossouw went on to score a hundred off just 48 balls to help South Africa post a massive total of 227 runs in the third T20I in Holkar Cricket Stadium, Indore.

Team India has already won the series by 2-0 beating the Proteas in the first two games of the last T20I series before the World Cup for both these teams.