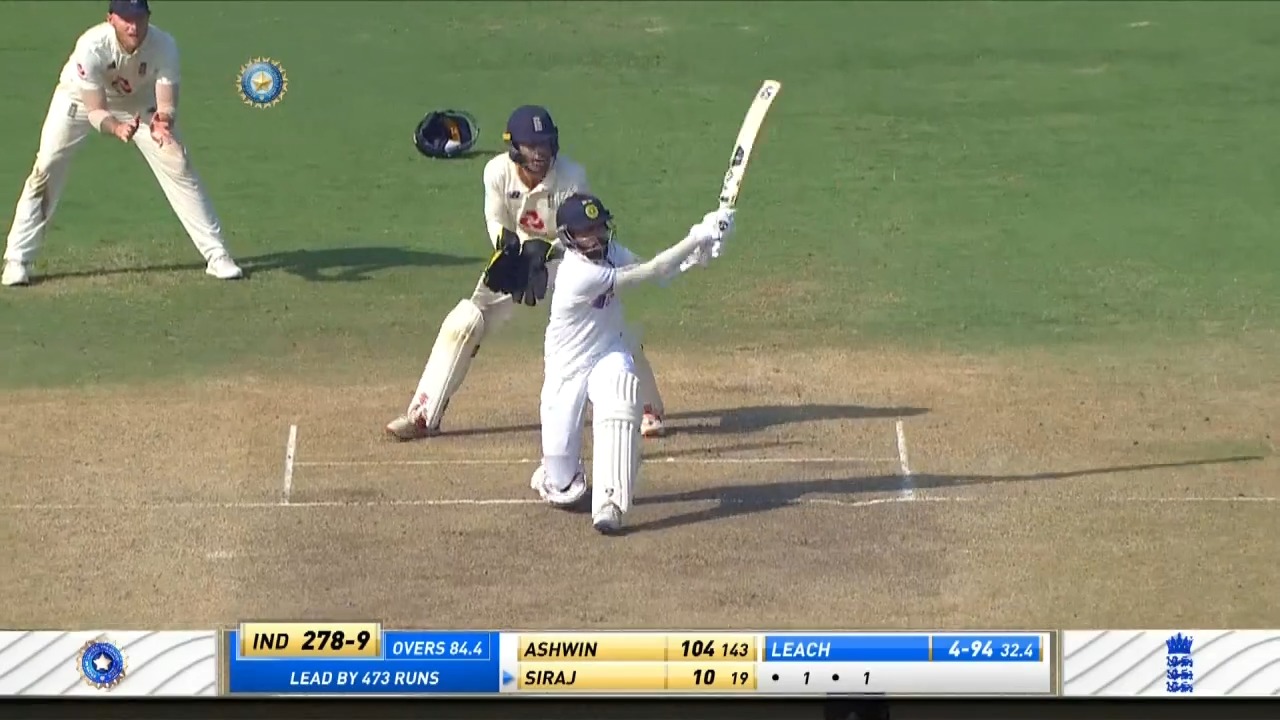 Day three of the ongoing India-England test match at Chepauk saw the hosts extend their dominance even further with a spirited batting performance. Captain Virat Kohli, after being given out in a rather bemusing fashion in the first innings; made a strong comeback in the second innings and stitched a defining 104-run partnership with Ravichandran Ashwin.

Speaking of whom, the Tamil Nadu-born homeboy showed immense application while batting and notched up his test career’s fifth hundred. For India fans, it sure was a refreshing sight to see Ash play at his best; especially on a pitch that got progressively harder to bat on. Ashwin’s mature batsmanship, which featured a healthy amount of sweep and cut shots, allowed India to extend their lead to 481.

His innings ended on 106, courtesy of a fiery delivery from Olly Stone that rattled his off-stump. Regardless, thanks to his spectacular all-round effort (5/ 43 and 1/ 28 with the ball so far), India stands in good stead of leveling the 4-match series 1-1 here at Chennai.

But for as flamboyant as Ashwin’s knock was, the highlight of India’s batting was Mohammed Siraj’s six off Jack Leach…and how captain Kohli reacted to it! During the 83rd over of the innings, the Indian number 11 batsman decided to adopt an adventurous approach in his batting.

Seeing Ashwin score quick runs at the other end must have liberated the pressure off Siraj’s mind. Thus, when Leach lobbed him a slightly fullish delivery, he decided to go for the swing. And in the process, Siraj ended up dispatching the ball over long-on for a goliath maximum! Clearly, he enjoyed the shot; so much so that he tried (unsuccessfully) to cream the next ball for another boundary.

But more than his amusement, it was captain Virat Kohli’s expression of amusement that caught everyone’s attention. The on-air camera footage caught him sitting in the dressing room, sporting a big grin at Siraj’s unconventional strokeplay. It was quite reminiscent of a famous meme reaction that Kohli had in 2019; back when Jasprit Bumrah- another number eleven batter- had clobbered a giant maximum! Here’s the video:

As far as England’s position in the match is concerned, they have two days left to chase a daunting target of 429-runs. And having lost three-wickets already, they’ll have to be cautious about their approach. For the time being, though, captain Joe Root (2*) and Dan Lawrence (19*) will be eager to take the game as deep as possible.