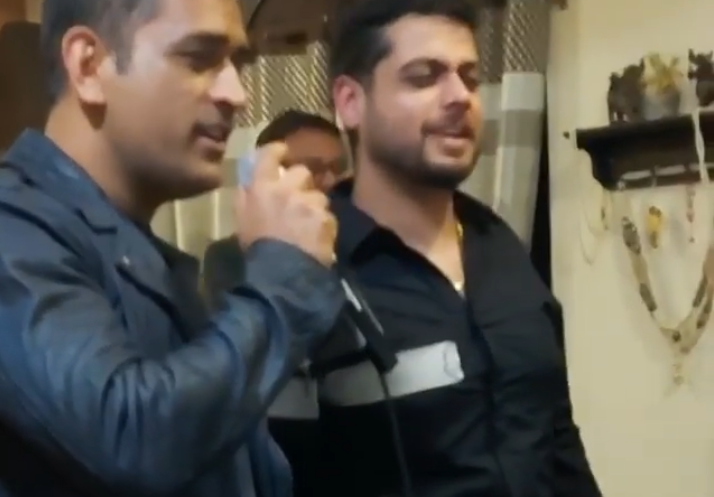 Since a long time, MS Dhoni has not been part of the Indian cricket team. Fans are eagerly waiting for the MS Dhoni action. And according to the reports, he may return back to the cricket ground in January 2020. Currently, MSD is enjoying his time with his family and friends in his home town Ranchi. And also he had participated in many sports events in recent time, recently he had won the Tennis tournament in Ranchi.

Meanwhile, MS Dhoni has also shown his talent in singing, Actually, a clip of Dhoni is doing rounds on social media in which he is singing ‘Jab Koi Baat Bigad Jaye’, a Kumar Sanu hit from the movie Jurm. As we all know that MS Dhoni’s love for old songs is great and no wonder he admires Kishore Kumar a lot. We have seen Dhoni singing old hits many times.

The video of Dhoni singing song is getting viral over the Internet. The cricketer’s fan club posted the video and wrote, “Listen at your own risk as @mahi7781 is all set to conquer your heart all over again!???? . #jabkoibaatbigadjaye❤️ #Dhoni #MSDhoni #RanchiDiary.

It has been a long time passed since the former captain has not played for India, but this didn’t affect love from fans towards the legendary cricket. We can still see him trending on social media often. Even when he doesn’t play, the fan base he has makes sure the name ‘Dhoni’ doesn’t disappear. here we are sharing the video in which MS Dhoni is singing a song ‘Jab Koi Bat Bigad Jaye’.

Listen at your own risk as @mahi7781 is all set to conquer your heart all over again!🥰 #jabkoibaatbigadjaye❤️ #Dhoni #MSDhoni #RanchiDiary

Since the ICC World Cup 2019, there were rumours of Dhoni’s retirement from international cricket. However, none of the officials or Dhoni himself given any information related to this. But wicket-keeper batsman is continuously making himself unavailable from international cricket. And this was enough to break the hearts of the fans as everybody is waiting for MS acton. Recently, 38-year-old has reacted for the very first time over his unavailability from the cricket. He said, ‘Don’t ask till January’ when a reporter asked. So it may be a sign of his return in January at the international platform for once more time.