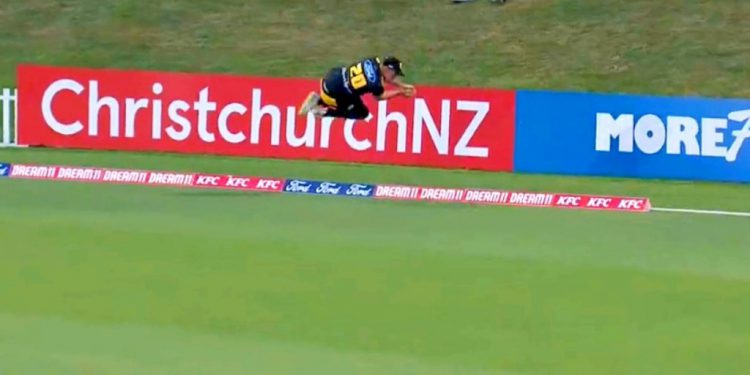 Wellington Firebirds put 177 runs on the board for the loss of 7 wickets as Finn Allen top-scored with his destructive fifty-seven run knock. However, Finn Allen’s limelight was stolen from him when his team-mate, Nathan Smith, took an insane catch in the game’s second inning.

New Zealand’s international pacer Hamish Bennet was handed the opening over of second inning. While he gave just one run off his first two deliveries, the third ball that he bowled was right in the slot. His leg-lined full delivery was swung high in the night sky by Kings’ opener Ken McCulure. The hit seemed to be destined for a half-a-dozen runs.

However, Nathan Smith, who’s a young kiwi pacer, had other plans. Nathan is lanky and his height often helps him generate extra bounce whenever he bowls. But this time around his height helped him snuggle a miraculous boundary catch. Here’s the video.

Nathan came running to his right, perhaps from mid-wicket, and got his hands onto the ball before it could clear the boundary cushions. However, he was bound to be carried over the cushions by his momentum. But he realised and used his lanky-ness to his advantage. Displaying an astute presence of mind, he released the ball up in the air before tripping over.

When Smith re-entered the playing field, the ball was still far behind him. None could have imagined he’d still be able to hold onto it. But courtesy an acrobatic leap where he bent his body like a rubber-band, Nathan managed to catch it behind his body.

While this fielding instance of his was totally miraculous, same can’t be said about his bowling. Nathan gave away 40 runs off his four-over quota though he did redeem himself with 2 wickets at the end of his spell. Nonetheless, Michael Bracewell’s 3/22 ensured that Wellington Firebirds started their campaign with a 27-run win over Canterbury.